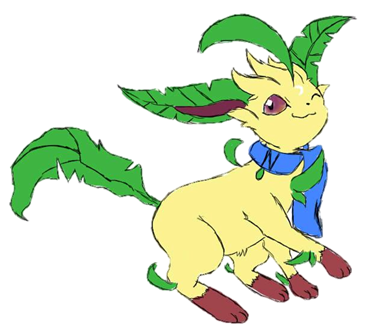 Pokédex Entry-
With cells similar to those of plants, it performs photosynthesis inside its body and creates pure air.


History-
Shiva was born from a family of Eeveelutions that were in a day care in the Johto Region. Her mother and father were a Glaceon and a Vaporeon who cared deeply for all of their Pokemon. Shiva was born, along with her twin brother, as a regular Eevee, just like their brothers and sisters had been, but she held the birthmark of a Half Moon while her brother, Meghdad, had the birthmark of the Full Moon. Her parents didn’t understand why her and her brother had the birthmarks, but they loved them just as much as they love their other children. One day, when Shiva was playing around the fence at the daycare a trainer came into the daycare and asked the owners if he could get an Eevee from them. The owners had seen how excited the trainer was and smiled before they led him to the back yard where he could see the young Eevees. At that moment a Seviper came into the yard and was peering at the young Pokemon like a hunter. Its gaze landed on Shiva before it attacked. Luckily, her twin brother Meghdad saw the Seviper and used a Powerful Tackle attack to knock the Seviper away from her and stood protectively in front of her. The Seviper didn’t give up easily and continued to try to get past Meghdad to get to Shiva, but the brave older brother, by a few seconds, kept on knocking the Seviper away until he finally hit it hard enough to send it flying out of the yard.

Afterwards, the Seviper retreated, giving up on its meal to search for an easier meal. When the trainer saw this he told the owners that he would like to take the two Eevees under his care. The daycare owners were surprise that the trainer wanted both of the Eevees but also glad that he didn’t plan on separating the two siblings. Once the trainer had Meghdad and Shiva he decide to give them names, which is how Shiva and Meghdad got their name. They learned that their new trainers name was Jacob and he raised them well. Jacob had wanted a Glaceon, which is what he told the two little Eevees, and he had asked Meghdad if he would be happy to become a Glaceon. Shiva watch as Meghdad gave it some thought before he nodded his head in agreeing on becoming an ice-type Pokemon. With that decided Jacob took the next ferry to Snowpoint City, in the Sinnoh Region, since he heard that around there he could evolve Meghdad into a Glaceon. After a while, and after they made it to Snowpoint City, Jacob was able to find the mysterious stone that will help Meghdad evolve and began to train the male Eevee around there until Meghdad finally evolve into a Glaceon. While they were still in the Sinnoh Region Jacob thought that he will help Shiva evolve into a Leafeon. So after he helped Meghdad evolve Jacob went to Eterna Forest and went to the Moss Rock and trained Shiva around it until she evolved into the Leafeon she is now. Jacob was so happy for his two Eevees and for himself and decided to head back home to the Johto Region to take on the Johto League. He even taught some TM moves to both Meghdad and Shiva so they will have a good set of moves. He taught Meghdad Ice Beam and Hail while he taught Shiva Solarbeam and Sunny Day. Jacob made it to the Elite Four easily with the help of Meghdad and Shiva and even went up against the Champion in the Johto League and became a champion himself. But right when they were going to celebrate their victory the epidemic hit.

At first Jacob paid it no mind and didn’t leave when the officer’s told him to. He didn’t want to leave his two friends behind because he knew he will be force to release them. But Meghdad got him to change his mind when they face off against an infected Mightyena. Shiva watch as Meghdad was able to defeat the Pokemon with his TM move Ice Beam, with the combination of his other TM move, Hail. After the battle Meghdad force both Jacob and Shiva to get on a ferry and was about to join them. But before he could do so a flock of Murkrow and Honchkrow attacked. In order to protect his trainer and Shiva, Meghdad stood his ground and used his powerful Ice attacks to defeat the flock. When he finishes them off he knew that the ferry was gone along with his trainer and his sister. After Shiva was separated from her brother she and Jacob stayed on the ferry and went to a new region that hadn’t been struck by the epidemic. Jacob and Shiva tried to find ways to get back to the Johto Region and back to Meghdad but again the epidemic struck Unova. It happened when Jacob and Shiva were in Opelucid City and this time Jacob was force to leave Shiva behind. He told her to find her brother and survive this epidemic and they will meet again. While Shiva was walking alone when she heard the sound of fighting in the area she was at. She was heading in that direction when she saw a Primape beating up a group of three different Pokemon she recognized as a Tyranitar, Scyther, and Crawdaunt. She watched with wide eyes as the lone Primape defeated the three Pokemon, but with him still in his rage he came at her next. Just before his attack hit the Primape seems to be coming out of his rage and stopped.

The two of them look at each other and the Primape seems to calm down even more which cause Shiva to relax and give a shy smile to the Primape before her. She gave her name to him as an introduction and learned his name was Rixator. After the introductions were made, and before they could get to know each other more, an infected Vanilluxe appeared. Shiva was worried but she didn’t back down and began to fight against the ice type while ignoring the disadvantage she had against the Snowstorm Pokemon. At first she began to do well since she had used Sunny Day to help boost up her attacks and had landed a few good hits on the Vanilluxe including one good hit of Solarbeam but the ice type didn’t seem to be tiring while Shiva was and had sent several ice attacks at her until the ground Shiva was on became slick with ice. The infected seemed to grow smart at that and sent an Ice Beam at Shiva to cause her to jump up in the air to dodge the attack but when she landed back on the ground her paws slipped out from under her causing the Leafeon to fall on her side and left herself wide open for another Ice Beam. While Vanilluxe was getting ready to send the attack at her Rixator step in front of her and cross his arms and used a Cross Chop on the ice type before it could finish its attack. Shiva noticed that Rixator seemed to go into a rage once again as he continued to attack the Vanilluxe even when it was dead. Shiva got worried and got back up on her paws before she went over to Rixator and touch him with her muzzle hoping he will calm down. It seemed to work instantly as Rixator calm down and look at her. They talked for a bit after Rixator calmed down and from then on the two of them decided to join together on this journey of survival. Rixator to protector/fighter and Shiva as his mediator and to be there to stop him from going overboard with his temper.

Appearance-
Shiva is like any other female Leafeon, she has the same appearance as one though the only difference is she has a half moon on her forehead and she wears her Beauty Scarf and Miracle Seed around her neck.

Personality-
She is very kind and gentle around others. She is Bashful around those that she first meets and often stays close to Rixator when they meet new Pokemon until she gets to know the others better. She always makes sure that when Rixator fights that his temper won’t make him go into a deep rage.

She is much too young to be of so high of a level. Especially without diligent training to the point of near death every single day. It is the only way an 18 year old should have the level of an Aging Adult.

That's strange because as her twin Meghdad is at that same level Mewtwo and he was approve just fine. I fix her moves but I'm wondering about that and I fix her level to work with her age.
Mewtwo

Her brother was originally approved before the profiles update and remained active throughout, so he was grandfather clause-d in when you turned his dual into a single. That's why. His sister's profile is new and adheres to the current profile requirements so she gets no such treatment.