Phineas the One Eyed Luxray (Sinnoh, Any)

Phineas the One Eyed Luxray (Sinnoh, Any) 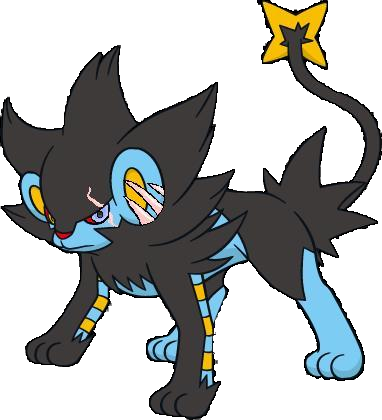 Height-
4'07"
Weight-
92.6lbs
Pokédex Entry-
Luxray's ability to see through objects comes in handy when it's scouting for danger.


History-
Ever since he was caught as a little Shinx, Phineas was with his trainer at all times. They did everything together. His trainer wasn't a trainer who battled Gym Leaders, only random trainers. He trained Phineas on wild pokemon, and when he evolved into Luxio, his trainer then moved on to trainers. Phineas loved battling, it was his pride and joy, other than being with his trainer.

When Phineas evolved into Luxray, his trainer and him already battled a lot of trainers. Phineas soon got bored as a battler, but his trainer wouldn't stop. His trainer loved battling because he thought he was really strong. So when Phineas refused to battle his trainer had to let him go. Phineas didn't know why they couldn't still be partners. From then on he lived a life of loneliness and sorrow.

When the epidemic happened he could care less about dying, but secretly inside he hoped one day to find his trainer. He killed any undead who crossed his path. For thirteen months, he wandered about the region. His only source of food was berries on trees and bushes. Thanks to his eyes he can see if undead are waiting for him.

Once when he was battling an undead Sandshew, the Sandshrew scratched and blinded Phineas in his left eye.

Personality-
Very serious all the time because he never has time to goof around. He usually thinks of himself as a leader because he has always been stronger the other Pokemon, and doesn't like taking directions from other people/Pokemon except for his trainer. Then didn't want to trust anymore people after his trainer abandoned him.

He loves Oran berries and hates Cheri berries, and he is a herbivore. And he hates dry berries and loves juicy fat berries.

User Note-
- He was his trainers only pokemon.
- He never trusted anyone except his trainer. But hated everything after he let him go.
- Also one more thing, he could only see from one eye and can still see through walls and things like that.

As the team was specified as ANY, Phineas the Luxray has been placed on the CORONET Team in Sinnoh
Sponsored content