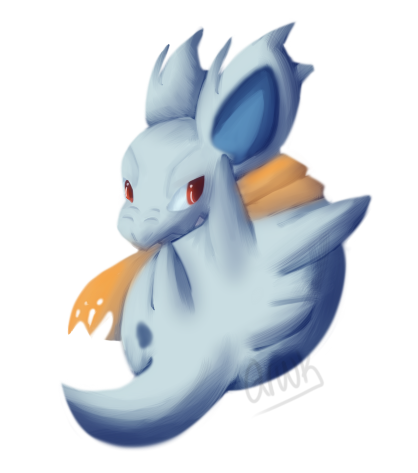 Poison of the broken

History-
Every pokemon has a story to tell. Mine is no different.

This is a story about a pokemon who was forced into a life of crime and killing. This pokemon had to fight to keep her life and was forced to kill so many innocent pokemon and humans to keep her life. In the end the killing only got worse and worse the more she wanted to life, but this is not were our story begins. Our story begins in a small area in the back of the National Park in Johto.

It was there that a family of Nido's lived. Now, when you hear the word Nido, do you think Nidoran and it's evolve forms? Well, then you are correct. In this family, was the mother and father, a Nidoqueen and a Nidoking. The oldest children, two Nidorino's and one Nidorina and finally, the baby of the family, a little egg. At the time, the hero of our story was still just the little egg.

At the time, Team Rocket was running around and using pokemon for their dirty deeds. As the happy parents patiently awaited for their egg to hatch, Team Rocket evaded the Park and started to take the wild pokemon. Our hero, who was still an egg, was stolen by the Rockets. The parents were killed and the our hero's brothers and sister were nowhere to be seen.

By the time our little egg hatched, Team Rocket was waiting. As soon as the small female Nidoran, the hero of the story, hatched Team Rocket put her to work. Our hero was worked to the bone. Never did she get a break till she got older, but for not our story must stick to her younger years and move up till the now her.

A love that'll never be.

As our hero got older, though she was still young, she eventually evolved. Though Team Rocket still caged our hero, but in her dark life, there was only one ray of sunshine, Doctor Nimh. Yes, Nimh is a human, but at the time our hero was very lonely. Ever sense our hero could remember, Doctor Nimh had been taking care of her and the other pokemon. Though it felt like he favored her more then the others and she really liked that.

All her time with the Rocket's she's been called hostile and dangerous, but the doctor never once thought that. He cared for our hero, not in the way our hero hoped for, but she was greatful non the less. Though one night, our hero awoke to the doctor at the front of her cage. When she got closer the doctor said that he had to come see her. Our hero's heart leap into her throat, but she swallowed the feeling back down. Our hero knew that a pokemon, especially one like her, could never be with a human.

The doctor went on to say that he wasn't going to be looking after our hero anymore and that this was his last night at the lab. Something inside her started to break and tears threaten to fall. The doctor tried to comfort her, he even held our hero, but nothing was capable of healing a broken heart. Our hero stared into the warm brown eyes of the doctor. She had stopped fighting, because well, this is what she wanted. Something in the doctors eyes told her it'd be alright for her to do what she did next.

Love, has a strange way of sneaking up on you.

Such a strange thing for our hero to do, but she did love him. The Nidorina looked at the doctor with her dull red eyes and spoke words of love for the human, but the doctor could not understand any of it. The doctor kissed our hero's forehead and said goodbye. The Nidorina clung to the cage door as she desperately tried to bring the doctor back to her, but her heart was broken and he wasn't going to pick up the pieces.

Before the doctor left the room, he stopped. Pulling something from his pocket the doctor said, "Maybe one day, we'll meet again. For now, this is goodbye." He tossed the item at the cage and walked out the room. The Nidorina snatched the item and clung to it for dear life. The item, was the doctors favorite scarf and tears burst from our hero's eyes. The Nidorina, was finally broken.

Such a cruel little story I live.

The night the doctor left, our hero was no longer completely there. Team Rocket had finally broken the Nidorina, but it seemed like mother nature was on our hero's side, because not even a week later, surprise surprise. The undead arrived and completely ravaged the lab. The humans were killed, the pokemon were released or killed. Our hero fought back, because that's all she knew. She wasn't ready to face the world so soon after being broken, but she had no idea if the doctor was alive or not. Even if it was a slim chance, our hero took it and set off to find the doctor. The dull orange of the scarf keeping her linked to this world.

Appearance-
She's covered in scars, though most center around her legs and neck. She wears the tattered scarf around her neck. She's mostly got a calm look on her face, but thanks to her great hearing she often growls and such, because of her time in Team Rocket. Most of the time she founds with her Rain Dance move active and a small black cloud over her head.
Personality-
She's "lost" her voice because of her time with Team Rocket and refuses to use it. She doesn't open up to people very easily and tends to leave living to die. She knows she's not affected by the virus and takes advantage of it. She's very hostile and dangerous to anyone who tries to sneak up on her and will use her spikes to defeat/kill the opponent. The dull orange of the scarf is what keeps Broken in the world of the living. Which means, without it she'd kill herself. Thinking the doctor's still alive is the only thing keeping HER alive.

-Still believes that the doctor is alive

Broken is ready for approval.
Mewtwo

The only thing that concerns me on this profile is this supposed kiss she shares with the human.

While it is already unlikely that a human and a Pokemon would fall in love with each other Nidorina, for all intents and purposes, has a beak. She lacks the necessary function of lips to even make a kiss much less mime one. Her pointed muzzle would stab the human in the face and push him away rather than form a tender moment. It would be like kissing a rhinoceros.
_________________

Um, alright. Is there anyway I can have them kiss or something close to it?
Mewtwo

I'm not sure how well Beastiality will go over on a site with so many minors on it.

I'd rather it just be cut out. You can have them really like each other but actual physical contact should be avoided or barely alluded to. I cannot approve this.
_________________

Alright, I changed it to where she spokes her feelings, but Nimh didn't understand any of it.

It works much better.