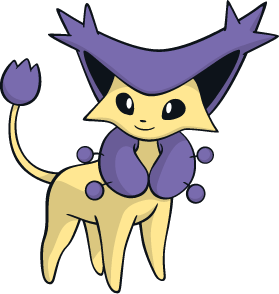 Nepeta was a little Skitty who was born to two Delcattys. However, her mother died giving birth and her father, Pounce de Leon, was the only guardian left to take care of her. Her father was a generous and kind tom, always looking out for little Nepeta and willingly becoming a living cushion for the Skitty. Life was fun for Nepeta, although a little difficult living in the wild.

One day when playing in the meadow the little Skitty had stumbled upon a ferocious Ursaring. Her father was catching Rattatas for food and had left her unattended, and she was scared. The Ursaring had outmatched her greatly, but right before the bear could kill her, a large, heavily muscled Rapidash came to her rescue, driving the bear off. The two closely bonded, the Rapidash calling himself Equius.

Afterwards Equius began to introduce Nepeta to other Pokemon [With permission from her father.], and the little Skitty was overjoyed at having so many companions. She began to roleplay with some of her friends and learned to fight, practicing with Equius. [Who wasn't very fond of the idea, he was scared he would hurt her.] The

-Talks with cat puns. Like; "Oh, that's just purr-fect!" "Purr-haps you should furget that..." "My best furrend hiss sooooo amazing!"

-Based off Nepeta from Homestuck.

Nepeta will always be in my heart.

What team will she be in? A character based off Nepeta is something I can NOT miss.