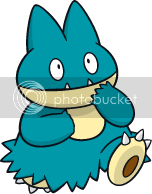 Name-
Molasses
Gender-
Male
Level-
36
Moves-
Fire Punch
Ice Punch
Thunder Punch
Double Team
Ability-
Thick Fat: Reduces damage done by fire and ice type moves.
Nature-
Gentle
Characteristics-
Loves to eat, enjoys meeting new friends, a late reactor, slow to catch drifts
National Dex No./Species-
#446 Munchlax/ Big Eater Pokemon
Height-
2'00" or 0.6m
Weight-
231.5lbs or 105.0kg
Pokédex Entry-
"In its desperation to gulp down food, it forgets about the food it has hidden under its fur."
Item-
Plenty of berries and assorted food hidden under his fur.
History
Molasses was born into a rich family within Sunnyshore, Sinnoh. He was assigned to be the partner Pokemon of the master's only daughter, to whom Molasses loved immediately. She named the Munchlax Molasses because he was a slow reactor to the things surrounding him. It was all in good spirit, and the two of them were nearly like siblings to one another.

This Munchlax didn't receive many opportunities to fight, so instead he learned to cook alongside Claire, his owner. When the cooks saw what natural talent Molasses had, they quickly made him part of the kitchen crew. Sadly, that also helped in filling his belly and leaving the pantry empty. Despite his big appetite, Molasses could create even the best of plates in limited time, and soon enough, the Munchlax had created a name for himself in the cooking business.

Claire and Molasses still played together on the days he was off, but when an order arrived from Johto for a special banquet, he was forced to part from his best friend. Although the departure was tearful, Claire promised Molasses that they would one day meet again. Both of them were not sure when he would return.

When he arrived at Johto, and created a feast even the premium chefs would gawk at, the infected sprung from nowhere and started to attack everyone. Ripping out the throats of humans, clawing the bodies until they were unrecognizable, and eating the guts of the once-lived; Molasses watched from a faraway corner, witnessing all the turmoil. Claire, his sister and friend, flashed through his mind, and Molasses knew what he needed to do. He ran away from the scene, hoping to find a way to assure himself that Claire was alive and okay.
User Note
- Molasses enjoys cooking; he uses the elemental punches to heat up, cool down, or soften his selected food.
Suicune

Approved.
You will be placed on the Ice Path team. Your turn will be after the Houndoom.
Silverishness