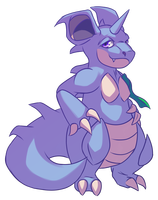 Characteristics
Proud of its power

Pokedex Entry
Nidoqueen's body is encased in extremely hard scales. It is adept at sending foes flying with harsh tackles. This Pokémon is at its strongest when it is defending its young. ORAS

Appearance
An average Nidoqueen in size and weight

Personality
Nira is a loving, caring Nidoqueen that takes care of other pokemon over herself. In a fight though she shows no mercy to the undead and watches everyone's back.

History
Nira had very little as a Nidoran. The family she was with was very poor, money was hard and her trainer didn't have much for toys for her. Then one day, her trainer's father got lucky and landed a high paying job. However, This was by the time Nira was grown into her teen years. After evolving and her trainer deciding to go take her to earn some badges. The Nidorina was very good at what she does. Fighting with a sense of good will.
For years, Nira had fought and made many victories in pokemon battles. Each victory lead to more opportunities for a chance to go against the Elite Four but unfortunately after the eighth gym, her trainer got very sick. The sickness though caused much more than just an ill human, it did some harm to her body and eventually was found out that the trainer had an aneurysm that crippled her permanently. However her trainer gave her  a moon stone and this led to her to evolve into a Nidoqueen.
Her for three years, Nira had taken care of her trainer, making her feel comfortable, helping her out, and making sure she had nothing to trip over. A month after that, they was evacuated from their home in Cerulian City. The oubreak had begun and for a while Nira stayed with her trainer while they had flew to an unknown location until just before they reached  the proximity of the location she was teleported away from her trainer. The only words that echoed into her mind from her trainer was; no matter how far we are, we'll always be together in spirit. Nira had one thing in mind, finding a place to ride out the storm and survive, at the same time, she would help others as long as she needed to with her motherly instincts.
User notes
-Caring and can be motherly sometimes
-uses double kick and poison jab in a combo attack
-Has a odd saying when something goes wrong
Current date/time is Sat Dec 03, 2022 9:29 pm