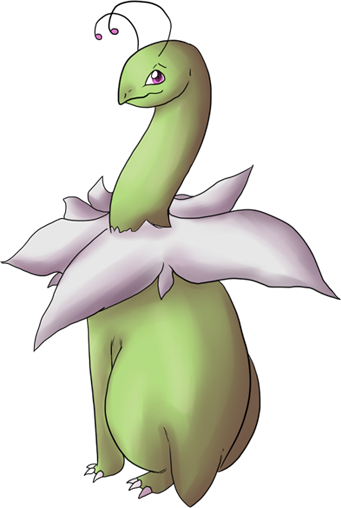 Ability-
Overgrow
When a Pokémon with Overgrow uses a Grass-type move, the power will increase by 1.5× if the user has less than or equal to ⅓ of its maximum HP remaining.

Pokédex Entry-
Its breath has the fantastic ability to revive dead plants and flowers.

She was a Fallen Magnolia...

Weeks after she had been laid to rest, she had re-opened her eyes to find that she was no longer in the cave that she believed she had died in. Actually, she hadn't died at all, she had passed out and evacuated by some generous humans into a Pokecenter for healing. She stayed in the Pokecenter for a long time, regaining her strength. However, her trainer, Trevor, had never come back for her, and she was left trainerless with a crowd of strangers in the facility.

It wasn't long before the Epidemic waltzed in. The humans began to put down any Pokemon within the center. Fortunately, Magnolia was outside when they began to shoot the Pokemon and she immediately fled far away, to somewhere where hopefully the killers couldn't reach her. She was unable to understand why they were putting down innocent Pokemon.

Soon, she found herself in the Ice Caves, hiding within the freezing cold caverns in hope that the humans didn't follow her there. Within the caves, she had witnessed strange Pokemon though... Walking with a weird gait and fighting each other. They almost always seemed angry... They seemed to bloodthirsty.

-She has no offensive moves, and will prefer to heal her team.

-Her nickname is Meggy.

-She's absolutely scared by the undead.

-She enjoys sliding on the ice of the ice caves, even if she is weak to Ice.

Re: Magnolia the Pure Meganium [Inactive]