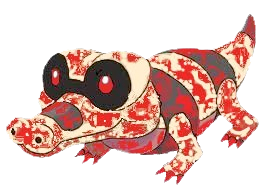 Pokédex Entry-It moves along below the sand's surface,except for its nose and eyes.A dark membrane shields its eyes from the sun.

History-Donovan was just an egg when he was given to his trainer.When he was hatched he was known to be playful if a bit mischievious.His master however wanted him to become stong and disciplined him both in training and in physical abuse.This led to deepemotional scarring in the young Sandile.Eventually he created a facade of what was once real playfulness but with a sadistic edge.He took his playfulness to far imagining everything as a game.
Then the Epidemic broke out Donovan was one of the first to be infected.His perception of reality and fantasy became increasingly distrted as his the infection attacked his brain.He now journeys throughout Kanto searching..for playmates.A search...that has led...to Viridian City!!

Is everybody ignoring me?
Abysswalker

All My Characters Are Trans
Lugia

Yes, please be patient with getting approved. I don't have Internet at home.

I have a couple of problems with this:

1) You need a better image. It can't have white bg, and if he's been infected this long, he would have discoloration and other disfigurement from being dead for so long.

2) At lvl 23, he can't possibly know earthquake or dig by level up.