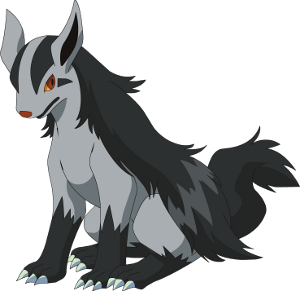 Pokédex Entry-
In the wild, Mightyena live in a pack. They never defy their leader's orders. They defeat foes with perfectly coordinated teamwork.

Ciara's life was never easy. She was bred in an overcrowded ranch, by an unauthorized pair. Her mother had bred with an Arcanine, however this was considered a sin since the ranch prided itself on the purity of their breeds. So from birth she was rejected, torn from her mother after hatching and put up for auction. The shy, and slightly small, Poochyena was taken by a Team Magma grunt who was pleased to learn that she had inherited two very powerful moves from her father. But life would not be easy for the little one.

The grunt was ruthless, forcing Ciara to fight over and over, usually at the cost of her own health. Several times she wound up in the Pokemon Center because she just couldn't take the strain. Even after teaching her a TM move she just wasn't strong enough to take down larger opponents, usually preferring to run and hide. Finally, after deciding she just wasn't worth it anymore, he abandoned the little puppy in the wild to fend for herself. As a final cruel joke the grunt tied an Everstone to her neck, so even in the wild she would not evolve. She was lost and alone, with no trainer, no alpha, and her pack nature screaming at her to find a leader.

She wandered for almost a year, growing ever stronger, but still lost in her depression. She wasn't even aware of crossing into another region when she stowed away on a boat. Several times she ran into other Pokemon, but they would not accept her. She was considered a vicious breed and no other species would take her. Even her own kind rejected her because she was a trainer pup, not one of their own, usually turning her away as soon as they saw the stone. But still she persisted, ever hopeful of finding her own pack one day.

Not long after the epidemic started, she was being driven off by an angry farmer for pilfering some of his trash when she came across an infected Scyther. Without warning it lunged for the small Poochyena and she fled in terror. After killing the farmer it gave chase, slashing at her with its large blades, narrowly missing her each time. When she was cornered, it reached for her but Ciara managed to pull away just in time, the blade arm catching the rope tied around her neck. The stone ripped from her neck and, in terror, she used the first attack that came to mind, Fire Fang. The Scyther burned in the flames and Ciara felt herself changing. A bright light surrounded her and when it faded the world looked...different. She had evolved.

The new Mightyena quickly fled from the corpse of the Scyther, wanting to be as far away from that creature as possible. Luckily, though she had no idea of it, she had a resistance to the virus and was not infected after the battle this time. Her pack instincts grew exponentially and she set off in search, once again, of a pack to call her own.

- She is very submissive, will bend to the will of most stronger Pokemon (unless she recognizes an alpha)

- Naturally very quiet and reclusive, she doesn't like conflict, fights only when it is necessary or when ordered to

- Has a fear of rejection

It can in the Gen it was created, I have seven Mightyena with Secret Power in my Emerald. But if you would prefer me to keep to newer Gens I can.
Lugia