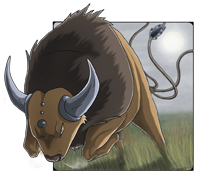 Appearance-
He's strong, and it shows. He's built and very large. His horns are longer than average, and curve up. He has a steely gaze. He has quite a few scars on his horns, face and body, which came from spars with other bulls, as well as the many infected he has fought. His voice is worn and gravelly, real monotone.

Personality-
Pyth is a natural leader, level-headed in danger and strong-willed. He hated what the infection did, but he sees everything as a challenge. He doesn't fear anything, but is smart enough to know when to retreat. He tends to drive others too hard, holding them up to his unique standards of excellence. He cares strongly for any that come under his lead, or those he considers 'herd.'  Fiercely loyal. He looks down on others who show fear with weakness. He's an older pokemon in age, and comes across as a salty old man; his experiences have hardened him. Calls almost anyone 'kid.'

History
Pyth was the leader of one of the strongest Tauros herds in all of Kanto; the Safari Zone had been infamous for their fierce buls, and only the strongest trainers were able to successfully capture members from his herd. But when the epidemic hit, it hit hard. They were able to trample anything that tried to attack them, keeping most of the infected at bay with teamwork and raw power.

But the waters of the Safari Zone was the true culprit for spreading the disease to the majority of his family and herd. Eventually, the herd dwindled down to a handful. The few that were left had fled out of fear, leaving Pyth to defend his home alone. Disillusioned, he too, fled the Safari Zones' lush fields, long after the area had been overrun. Ever since, he has been a lone Tauros, wandering as far from his homeland as he could.

- original art is by shorty-antics-27 of DA.

Don't forget to label the moves on how they were learned, hon. Even natural moves need to be labelled.

You'll need to include a 'personality' and 'appearance' section; most of what's in the user notes can go into personality.

I'd also like you to include his age too, mostly to justify his level being decently high.