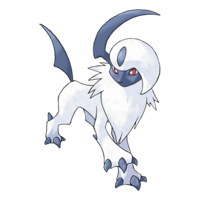 Pokédex Entry- It sharply senses even subtle changes in the sky and the land to predict natural disasters. It is a long-lived Pokémon that has a life-span of 100 years.

History
When Sin was younger,he was very mischievous and was always getting into fights with other Pokemon. His mother and father scolded him time and time again,but he never listened. Dispite his naughty habits, he always looked out for his little sister.
One day him and his father traveled out of the mountains to go find some berries for them to eat. Sin and his father always had a good time,and Sin would come up with different ways to prepare the berries.
When they came home,they found a gory scene. Three large Mightyena were feasting on Sin's mother and sister.
Sin's father him him in the bushes and went to fight the Mightyena. A sharp cry pierced the night are Sin's father fell. The Mightyena had their fill and left leaving bloody footprints behind.
Sin fled from his home and after months of traveling he reached Olivine City and gave out from exhaustion,just as a trainer named Alex came outside her home. Alex rushed to the Absol,rushed him to the Pokemon center and cared for him for a month or so.
Sin became attached to Alex and soon became her partner and named him "Sin" for unknown reasons.
User Note
-Alex gave Sin the Reaper Cloth after finding it on the fence of the Daycare where she worked.
- Sin's chest fur is a little fluffier than a normal Absol's.
-Alex often uses Sin as a pillow.
Suicune

Approved, but there cannot be any living people in your story...humans aren't allowed to be there, sorry.
You can have your pokemon searching for her, and maybe she can come into the story later...but not right now.
Also, if you so choose, you can either ask one of our artists to adjust an absol image to better fit your character(go post in the artists alley for requests like that), or just use a normal image, as its' not really a big alteration.
You have the choice of joining either the Olivine team or the Ilex team.
Guest

Ok then. You'll be after the Arbok.
If you can get yourself an image to use for your profile and your RP header of your pokemon as well. ^^

EDIT: Nevermind about the image; I see why your image wasn't working. Fixed.
Sponsored content