Finn the Braixen and Jack the Pikachu (Frost, Ace)

Finn the Braixen and Jack the Pikachu (Frost, Ace)

Appearance
An average Braixen in terms of height and weight unable to evolve due to constant startling.
Personality
Finn isn't one to mess with, angered at his trainer he became less optimistic and very serious about his life. Has no love for his trainer for the lies he was fed.
History
Finn was young when he was given to a trainer though he couldn't remember much about his past. He was taken to quite a decent home and was raised by his trainer. What Finn didn't know while he was a child was that his trainer had no desire to let him become a Delphox. The young Fenniken did have lots of fun as a child. All that changed though once he became a Braixen. His teen years, he became more and more distant from his trainer not knowing where his trainer takes off to half of the time and when his trainer came home Finn was usually sleeping.
One day, Finn was just walking around the house trying to find out why his trainer was gone most of the time. Until one day he finally came home carrying a bag of unusual items. Following his trainer, Finn tried to get his trainer's attention. Eventually, he did and with the trainer not having nothing else to do for the time being they went and trained as hard as they could. The Braixen wasn't aware though that he was being trained for dealing with the police. As he became an adult, his trainer kept startling him to the point where he gave up on evolving.
Then, a few years went by and his trainer decided to meet with his so called friends. Finn was alone in the house and upon one of his walks he finds an unusual object sticking out of the bookshelf. Finn pushed it in and a hidden room opens up in the house. using the stick that was on his tail as a makeshift torch, he sees not only weapons, but newspapers with robbery stories on it. The Braixen soon got the clue that he was going to be used in a robbery. Leaving the hidden room, Finn was very angry with his trainer and went straight to the police. The Braixen talked with the officers pokemon and led the officer and their pokemon to the house where they found a large amount of money that was reported stolen. The trainer got home only to be arrested for robbery. The Braixen however stared at his master in anger for all the lies that he was given.
Things was starting to look better for Finn now that his thief of a trainer is behind bars, but this wouldn't last forever as news of an illness started going around infecting pokemon from around the world. Finn wondered into the city where rumors of the sickness was heard. it took a few short days from a lively city to be turned into ruins. The Braixen went into the police station where his trainer was being held. Nobody was around and their was blood coming from where the jail cells was. Finn opened the door and when he looked inside the same pokemon that he talked to was now undead and moving at him. Without hesitation he pulls the stick out of his tail and fights the undead. After killing them he went to his master's cell and found that he was missing and in its place was a dead officer. Finn started targeting undead left and right killing them with his psychic and flamethrower and if one survives his attack he will get physical and fire punch it to death. The Braixen will not tolerate anyone getting on his bad side. Now with the current state of the world his only option is to find any survivors and help them out.
User Notes
-Kills undead from afar, but rarely gets physical
-Doesn't care about his trainer.
-Down to earth and won't tolerate being insulted
-Uses his twig as a torch in dark rooms. 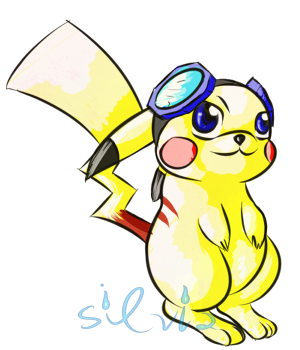 Pokedex Entry
It occasionally uses an electric shock to recharge a fellow Pikachu that is in a weakened state.  W2

Calm, collective, and uses his wits to deal with enemies, Jack is not your average Pikachu. He sports a pair of goggles, some might say he's a goggle fanatic. He maintains his cool when faced with a difficult task, but oftenly carries out his own weight in battle.

Appearance
An average sized Pikachu, but wears the goggles over his eyes when in combat.

History
Jack was an ordinary average Pikachu with a hobby of wearing goggles. It all started 21 years ago just a few years after he was born, he got a hold of a pair of goggles a trainer was making which happened to be the right size for his pichu. So, he put them on Jack and ever since then he has worn goggles on him. Though he evolved later on to a pikachu the goggles got refitted and through battle he had worn them over his eyes as a way to show his more collective side.

Unlike most Pikachus, he doesn't seem to mind to be petted by others. None can say why though but under those goggles lied a clever pokemon often studies his opponents movements and aims for their weak spots making him a well trained pokemon. In the next few years he was left to help out with the goggle making with his trainer. He didn't mind it as he grew to love testing out the goggles often for mostly pokemon that went to the mountains for sports.

When the day came of the outbreak his trainer was forced to evacuate along with the other humans. Jack was left behind by accident and since then he's been on a wild ride trying to find his trainer and reunite with him. He fought with many undead and managed to keep himself alive through his clever thinking. His only priority is to find others that are still alive and aid them as much as he can. Jack has yet to meet any fellow Pikachus.

His ultimate goal is to reunite with his trainer, but he has no clues to his whereabouts or when he'll return for him. Only thing he knows is that he must survive the nightmare that is the undead

To the Main PC please
Victini