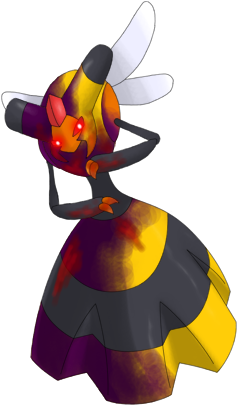 Approximate time of infection:
Beginning of the third month after the outbreak.

History:
“All hale Lady Leariana!”
She had just been crowned queen of her hive. Out of all the Hombee, she was the most fit for the job, so when she evolved into a Vespiquen, they immediately put her to the test. She had to make sure everything ran accordingly under the supervision of the previous queen. If she passed, then she would take her job as queen of the hive, but if she were to fail, then she would be cast out to forever roam alone in the lands of Sinnoh. But luck was on her side and out of all the other Vespiquen that had evolved at the same time as her, she was the one chosen to be come the next queen.

She was in charge of everything. From the honey to the workers, everything belonged to her. But then the infection hit, and everything was taken from her. Her hive was devastated, that she and the few survivors that where left had no choice but to flee. But no matter how far they fled, there was always more chose, and death. Her entire hive was gone, and the rest of her survivors where dead along with it. She was the only one left, she was alone, for the first time in her life, she had no one.

She somehow found herself on a raft, that had drifted off, away from her home and hopefully the infection. She didn’t know how long she had drifted before she finally saw land once again, but it felt like days. She had gone so long without anything to eat or drink, she was famished that there was no way she would be able to survive for much longer. Once ashore the first thing she looked for was nectar, with that she could easily make some honey. She may be the queen, but she was a Combee once, and she still had the skill to make honey, as did any other Vespiquen.

As she was looking she didn’t notice that she was being hunted. She was to fixated on finding nectar to make honey with, that she hadn’t noticed the foul stench in the air before it was too late. The pokemon attacked her, biting down on her comb like hide, trying to take a large bite out if it, but she managed to get it off her with a fearsome slash. She tried to get a good look at what had bitten her, but that kind of pokemon was unknown to her. She managed to fight back agonised the pokemon, killing it without any mercy, just to keep herself alive, that was all that mattered to her. Not even knowing that it was already to late.

About a week after that encounter she started to feel the effects of the infection. She started to be unable to fly, collapsing on the ground in a silent forest, unable to even lift a single wing. It was there that she died, in a place that no longer had any life, just like her. She awoke hours later, but as a different pokemon. Her eyes, which seemed so alive and filled with joy, now held no emotion and no life. She began to fly off into the dense forest, in the same direction she had been going before she fell, but this time looking for something other, then just nectar.

User Notes:
Small traces of honey tend to be left on those she kills, as it seems she still has the urge to make it even though she’s no longer alive.
Tends to believe that the blood of the living is red honey, so she will rip her victims apart just to get it.
Purple has begun to consume her yellow areas as a result of the infection.
Suicune

She’s going to be placed on Slange Fortree City Team once its made.
Sponsored content