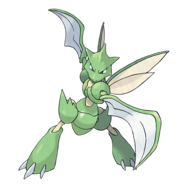 Height- 5'0" (A little taller than most Scyther, but it isn't that noticable.)

Pokédex Entry- Its blindingly fast speed adds to the sharpness of its twin forearm scythes. The scythes can slice through thick logs in one wicked stroke. (Emerald Dex)

History
He had always been the only Scyther he could find in that place, thus he had to learn for himself what to do. Hunt, survive, kill...That was how it was. Always had been. It never changed and he never wondered what was beyond that building that he had seen odd creatures go in and out of. It was pure foolishness that lead him to be captured by an eleven-year old with a taste for travelling.

It was hard for the newly-dubbed Seven to accept that he was now a trainer's pokemon. He kept up his usual patterns, irritating the other two pokemon that travelled with the boy. The boy finally figured out an arrangement that suited both of them. Seven would spar with the boy and he would be able to hunt in the wild only if the Scyther could act like a semi-calm pokemon in places with other people.

He lived like this until the infection started. Then things started going haywire. Seven was thrilled by the hunt of the new prey, even though he couldn't eat them. These foes were stronger, more worthy of fighting. As most of the pokemon on his trainer's and his trainer's brother's teams were decimated by the zombies, some even becoming those that destroyed them, he figured out strategies to defeat them.

The one thing that changed his main mindset was the last fight with his trainer and his trainer's brother. They had decided to travel during the night for a bit, as they were in a wide open area by the end of the day. They weren't expecting the swarm of flying pokemon that had attacked the three. The first to fall was Alex, the brother who has sacrificed his life to give Seven's trainer a chance at getting through this battle. Seven felt an odd feeling when it had happened.

And only after Zed, his trainer, had died that he figured out what he had felt. Respect for the two brothers. This sensation sent him into a rage. "How dare they destroy two extrodinary beings...I shall find out who started this virus and do the same." And thus, his journey began.
User Note
- Nature-wise: He is an inflexible pokemon, resistant to most reasoning. The only thing that could reason with him was his trainer. He is very determined to deal what he considers justice. Oddly enough, the zombies haven't phased him beyond the first day it happened. Rather, he finds it an exciting new thrill.
- Characteristics-wise: In his life before the infection, he never stopped until his prey was taken down. In this new segment of it, he hasn't wavered in that mind set. The only thing that has really changed is what he considers prey, and why he's doing it.
- It is very hard to earn Seven's respect. The only people who have earned it were his trainer and his trainer's brother.
- His previous and present personalities clash occasionally, particularly when he's hungry.
- His past personality: He will kill almost anything that moves, rarely stopping.
- His present personality: He knows the difference between ally and foe.
Suicune

Re: Seven the Scyther