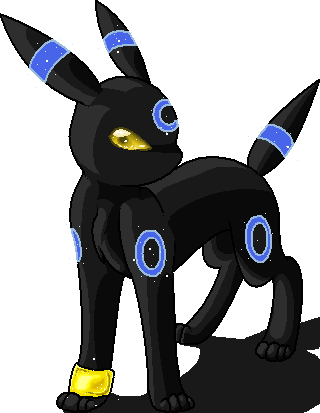 Ability:
Synchronize: Whenever Xavier is afflicted with a status condition, it is reflected back to the afflicter.

Nature:
Quirky: Xavier is quite unusual

Characteristics:
Loves to relax, likes to laugh, highly curious, can be cruel, and mad, as in insane.


Pokédex Entry:
When exposed to the moon's aura, the rings on its body glow faintly and it gains a mysterious power.

History:
Xavier was born into one of the strongest of thirteen rival clans living in the region of Kanto. Born to the head alpha female, Xavier was quite easy-going and good-humored from an early age, something his clan did not adjust to easily. They were pure-bred warriors, trained for battle and had minds of steel. Finally, Xavier's father taught him how to fight, to defeat his enemies and show no mercy to anybody, friend or foe. Xavier lost most of his humor and laid-back habits, constantly training and pushing himself forward. Unfortunately for his father, Xavier proved a powerful opponent in the title for alpha male, son challenging father. The clan set up a one-on-one, fight to the death match, pitting Jonah, Xavier's father, and Xavier himself against each other. It was brutal fight, to see family tearing each other apart. But Jonah was clearly outmatched, and Xavier sunk his teeth into the back of his father's neck, killing him. Xavier received only mere scars from the match, and took his throne as alpha male. Xavier sought to claim territory from the weaker clans, and led his own into battle against five of the thirteen tribes, killing off three and leaving the rest for dead. His clan held title as strongest, their territory the largest. Xavier was proud, perhaps too proud. He kept pushing himself forward, a thirst to prove his worth. Eventually he pushed too hard, and it would come to pass that Xavier would break.

Leading his clan, Xavier went against a very powerful clan led by the King of Ghosts, a Gengar named Burning-mist. It was bloody, malicious, and so many clanmembers were dying, killing each other off. Xavier finally found Burning-mist and cornered the great Ghost, easily landing mortal injuries even on the shadowed-one. Seeing Xavier's savage nature and desperate to destroy his ways, Burning-mist made a last-ditch effort and used the last of his strength to curse Xavier repeatedly, inflicting the Umbreon with mindless pain. Pain so intense, so agonizing...it drove the Alpha mad, insane, demented. As Burning-mist died, Xavier fell into his pools of madness. He had finally broke. The clan noticed his sudden change, how he regained his old laughter and relaxed ways. But he was very, very cruel, unusual, often drifting away from this world and into his shattered mind. A short attention span, insane speech and rapid mood swings left the clan dumbstruck. What was there leader thinking-he was making a fool of himself and the clan! It got so bad the clan drove Xavier away, stripping him of all his titles and glory. Only Xavier didn't care anymore.

He wandered Kanto until he passed Mt. Silver into the region of Johto, unaware of his surroundings and how vicious the Pokemon of Johto had become, mindless carnivores desperate for flesh and blood. He didn't care that they ate their own kind, he just killed them and walked away. What did it matter? He was crazy. Only after awhile, Xavier became bored and lonely. He longed for entertainment, someone to make him laugh his guts out, and wanted new challenges. Johto was so incredibly boring to him. His new title, Prince of Madness, was worthless without someone to share it with.

Someone like his sister, Maya, before she died, leaving the belt she wore as a last gift to her brother, Xavier. He wanted someone of his own kind, an Eeveelution. Not something like a regular human; he never expected to encounter one. But that was what he got.

Xavier had found an abandoned town (Cherrygrove, to be exact.) In a ruined house, he found a young female adult, around twenty or so years in age though Xavier wasn't quite familiar with human appearance. The girl was being guarded by a mean-looking Granbull, and she herself was crying softly. Xavier's heart melted that instant; he'd never seen someone so beautiful, since he lived with a violent and ragged clan. For that moment, his madness was forgotten, as if he had moved to a different realm where madness was normal. Comforting the woman, who's name turned out to be Jasmine, he learned that she had just lost her partner-for-life and her son. Jasmine accepted Xavier for what he was, even if he was mad, and the Granbull, Trey, eventually learned to get along with the Umbreon. Together they guarded Jasmine with their lives. The three became inseperable, Jasmine even taught Xavier new moves with her remaining TMs.

But it had to end eventually.

The three were out searching for more clean water when a strange rumbling occurred and the ground cracked open. From the forest, an undead Torterra who had just used Earthquake attacked them. The great Pokemon outmatched both Trey and Xavier, crushing Trey's skull with a Wood Hammer attack. As Xavier tried to fend off the beast alone, it used Frenzy Plant, the sharp roots cutting open Jasmine's sides and causing mortal injuries. It was then Xavier's madness reached a new level, and in this he unleashed his new move, Hidden Power, on the Torterra, engulfing the monster with wild flames. His Hidden Power's type had turned out to be Fire, but did that matter? Jasmine was dying right in front of him.

"You have to live, Xavier. Please."

It had been Jasmine's last words. Jasmine and Maya, both dead....Xavier could barely stand the thought.

Jasmine wanted him to live. It had been her dying wish. Xavier looked to the darkened sky and yelled his challenge. First it had been his sister, his sanity, then Trey, and then Jasmine; this world had taken everything from him!

But Xavier still chose to live. To survive.

It was her wish.

It was his promise.

-As stated, Xavier was driven mad and likes to call himself "Prince of Madness." A striking name, and if you get the reference I will love you forever.

-Loves to laugh, likes entertainment and killing people...Xavier also likes to have control of everything.

-Absolutely hates Bug-types, no question. His sister was killed by the poison of a Venemoth.