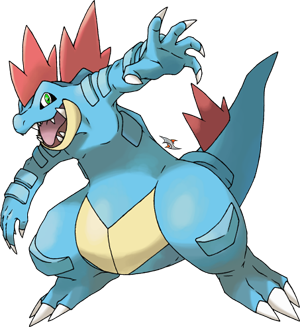 Pokédex Entry- When it bites with its massive and powerful jaws, it shakes its head and savagely tears its victim up.

History
Sobek was born in captivity but he was always wild a Feraligatr. After he hatched Sobek used the Aqua Jet and Hydro Pump moves, he inherited from his Blastoise father to escape with his mother into the wild. He gained infamy in his home swamp by having no qualms about killing people if they came to close. Many people tried to capture him; trainers, animal control and more in an attempt to end his reign. Only one succeeded, but Sobek ate him as soon as he was let out of his Pokeball, so it doesn’t really count. He has a nasty little trick of using his ice fang to freeze a path across his waters then shattering the thin ice and dragging the helpless person down into the depths to eat. Life was sweet for this Big Jaw Pokemon, till the bloody epidemic.
When the infection hit, Sobek thought it was good at first. There were no large pokemon besides him around anyway so the infected that didn’t run were easily killed, leaving the vicious crocodile to crawl out of his swamp and into town to massacre the weak infected. When every infected within a mile of the town was either dead or had run away, the townspeople emerged, thinking he was a trainers pokemon. He ate them all; amassing a dragon’s drove of bones picked completely clean in the centre of town. As he curled atop the mountain of bones, Sobek realized something terrible, something horrible, something that resided his deepest, darkest nightmares. There was no one left to eat. So humming a tune he’d once heard the children near his swamp singing, the great reptile crawled down from his hoard and slid into the sea to search for new hunting grounds.

So he drifted along the coast of Johto, eating any non-infected or human he could find, humming all the way. After having to go out to sea for a few miles to avoid a drifting colony of infected Tentacruel, Sobek began to get bored and decided to go closer to shore to see what he could catch ending a up about half a mile south of goldenrod.

User Note
- The tune Sobek sings is “Never smile at a crocodile”
-He was named after the Egyptian crocodile god by the villagers before he…well… you know….ate them.
- While Sobek is vicious, blood-hungry and an all-round jerk most of the time, he is capable of cooperating with other pokemon if it suits him….and he doesn’t get hungry.
- Sobek may occasionally be moved to spare a child, due to the fact that his mother tried to eat him shortly after they escaped into the wild.

s thinking port, since he's water and there's only on member of that team
Sponsored content