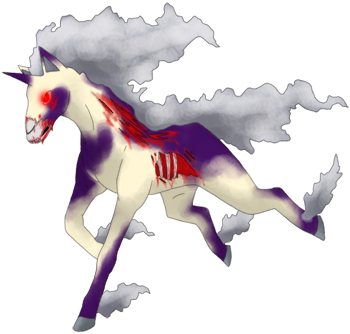 History:
Not only was this rapidash born as a shiny pokemon, but it was gifted with speed. It loved to run, and to it, running and speed was everything, nothing could touch it as long as it was faster than everything else. But because of this idea, he had become arrogant, and flaunted his advantage over everything, especially humans.

He would do his work at night, and steal anything it could get its hands on right in front of the humans, not for the items themselves, but to show that it could do it and get away with it. Eventually rumors started spreading of this dark speedy rapidash that came at night, so the towns people started calling it the NightMare. Rumors eventually turned into a small legend of the Nightmare that brought bad luck with it where ever it went, and trainer would come from far and wide to have a chance at trying to capture it.

None of the trainers had any luck in catching up to NightMare, much less defeating it, till eventually a specific trainer came riding on the back of a dodrio, not only did he beat him in speed, but also defeated NightMare. In the end he never caught it, which only made it worse for NightMare, it wounded his pride in a way nothing else could, and what made it worse was that the trainer kept trying to befriend him.

Eventually it got to the point that NightMare would let the trainer ride him, the only living thing to ever ride on top of NightMare, and the trainer let him train with his dodrio so it could one day reclaim its title of fastest in the land.

Though eventually their region caught wind of the infection that was spreading, the trainer wanted NightMare to go with him so that they’d both be safe, but NightMare was too stubborn and arrogant, he believed he could face any and all things thrown his way. The trainer refused to leave the shiny rapidash there in danger, but he also knew if he were to catch it, it’s free spirit would break and it would not be the same rapidash he ad grown accustomed to. In the end, the trainer stayed with the pokemon, every day trying to convince it to leave the region with him.

It wasn't until one day an especially ferocious Garchomp appeared out of nowhere, with its unbelievable flight with Mach speed capabilities, that NightMare really understood the situation. It was so fast that even he had trouble seeing the infected, but it had gone after the weaker prey and attacked the trainer first, effectively biting a huge chunk out of him. NightMare was in shock, the only human he ever respected, and even liked, had died because of his own stubbornness. The garchomp didn’t even finish eating the human when it turned its sights on him, his once prided speed not helping him now as it took a huge bite of his side, scrapping the bones even. He would have been instant food if the monster did not get distracted by the fleeing dodrio. NightMare blacked out at the image of the receding infected, when he woke he was no longer in control of himself and ate the remains of the trainer he had grown attached to.

User Notes:
-Flame Charge is its signature move
-Even its flames are off colored
-A voice who he thinks belongs to a psychic pokemon tells him to burn everything around him.
-The voice is really a manifestation of infection taking over his mind, but his prideful-ness is keeping it at bay for now.

Very nice character. When it gets further along, discoloration will need to take place, for future reference.
I give it another two weeks before it starts to show, as it is a fire type.
Choose your team.
_________________

Thanks, and m'kay, will add the discoloration later on.

I'd like him to be place in the safari team please. ((More room for him to run >:D))
Guest