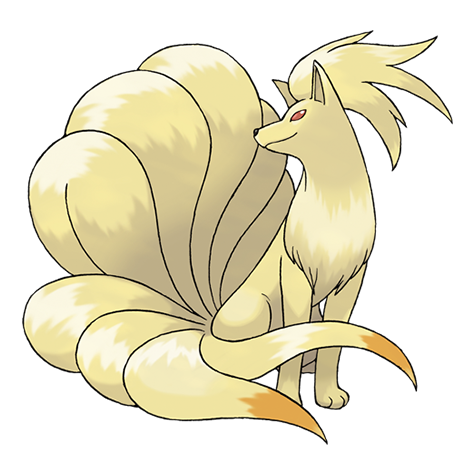 History-   Born and raised in a ranch for a single purpose, Kitsune was born to a ninetailed pairing hopeing to hatch with the fathers move extrasensory. As a Vulpix  when she hatched from her egg the ranch workers already knew that she was special in her own way having learned extrasensory from both ninetail parents. Choosing not to capture her like most wild pokemon they cared for on the ranch, she was trained for the show. The main hands little girl took a real shine to Kitsune and named her from the old books she read of fantasy.

They trained together for the beauty contests first at her young age (around Level7) to be broken into it as soon as possible, they were frowned at for her not being in a pokeball like the others but in the end allowed it. Having lost the first few years they had thought of stopping, Kitsune (level 15) pushed the now older girl to keep trying as she quietly promised to do better with her finisher move of fire spin she she was proud to show the others what she learned. Everyone then knew the best way to train was for the tiny vulpix to be captured and trained properly, Kitsune agreed and allowed herself to be captured by only the little girl she had grown close bonds with. Next few years they entered,Kitsune now Evolved into Ninetails (level 26) would be more of a sight to view then her tiny Vulpix form with a new ember to show the judges. Have been working for her trainer now Kitsune learned how to manipulate overheat that was given to her by her trainers father.

They won that year. The ranch became well know after that year with new trainers coming every year to see Kitsune, Kitsune grew arrogant from the attention. One day though the ranch was attack by a black cloud of foul birds, the common pokemon were the first to fall to them in the fields. The birds then attacked the main house, in retaliation to protect the ones she loved kitsune used overheat in the house killing most of the birds in one single move, but at a price.

The move had set the house quickly ablaze, unharmed from the fires herself she looked for the humans that had cared for her these years. Having found the man already reduced to ash from the burning attack she moved on to find the little girl. Screams upstairs, Kitsune ran up the stairs into the little girls room to find she was to late as the bird were already feasting on the body. Enraged she launched another overheat, to burn the remains and the birds in one attack (level 28). Drained of energy, she mourned deeply for the humans that she had just murdered.

She left the house into the fields were nothing but corpses lay and black smoke in the sky.


Personality- As a small vulpix she was all about the fun she had in the contests thus she let it go to her head and became spoiled and 'stuck up'. After the event she shut down and became quiet and lonely, she always looked like she was living that day again.

Species needs to have Species listed. Not just number and Classification.

Will-O-Wisp is not learned until level 31 by prior evo and she is already evolved and not to that level. You only qualify for BW rules not BW2.

Also, if she 'rushed' her evolution by touching a stone too early as a child she likely wouldn't have Confuse Ray either. Fire Spin is pushing it. Such an event must also be in detail in history when using Prior evo moves, not just in Personality.

okay sorry didn't know what bw thing was I added the class and changed around a few moves to allow the move extrasensory to be breed in from both revised parents.
Mewtwo

BW is Black and White, basically fifth gen rules of what a Pokemon can learn. Black and White 2 downgraded when some moves can be learned, giving them earlier levels for it, but we only allow that to apply to Toddlers and younger. As your character is an Adult they qualify for Black and White only.

Your move changes are acceptable.