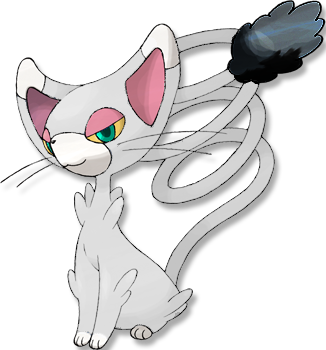 History
Within the tall grass tufts of Route 222, lay a clan of Puruglies and Glameows. A small kitten had just been born, whose bright green eyes and odd pale gray fur brought her to the center of attention. But she was always a modest Glameow, and cared for the kittens that were younger than her as she grew. The elder Puruglies and grown cats adored her manners, especially her proud parents. That is, it was so, until a forest fire raged through their campsite. The clan fled in fear and in shock of the fiery flames. In the midst of their flight, a small, odd-colored Glameow feebly curled up into a ball. Her pale gray fur was black with soot, and the fire was starting lap up around her. Death, was her thought as she accepted her fate. As she was resigning to her short life, something grabbed her by the scruff, hauling her away from the flaming area.

The Glameow had fainted then, either from shock of being saved, or taking in too much smog, she didn't know. But when she awoke, she was in a Pokemon Center, facing a grown man in his twenties. His blue yes twinkled in relief, and he introduced himself as Arthur, the man who one day hopes to write stories for young kids. Guiding Light for the Lost was borne then, with a new life to look forward to with her new trainer.

She found out later that he was traveling by himself, and that he saw the forest fire and found her half-dead. Light was his first Pokemon, and for a long time, was his only Pokemon. He was a lost soul without her, and Light knew that- together, they ventured the land of Sinnoh, watching Pokemon battles and contests. The world was gathering in their mind.

Arthur, with a glance towards his Pokedex, grabbed a tub of black ink and dipped Light's tail tip into it. At first the Glameow didn't enjoy the ink, but as soon as she saw his intent, she was all for it. The soon-to-be author would write a short story, and after reading it, Light would illustrate segments. They were a pair. But Arthur was aging, and with that, he captured other Pokemon to help with his stories, granting him new eyes to look at the world.

There was a time when Arthur had dropped a white stone onto the ground, and it had crashed into multiple tiny pieces. Light, in an attempt to clean it up, licked it with her tongue. The man had shouted in alarm, causing Light to stop trying to clean the trash, but it was too late; she has swallowed an Everstone. Light was sad for a while that she was never going to evolve, but she figured that there was no use crying over spilled Moomoo milk.

Then Elder Author (that's what many of her Pokemon friends called Arthur nowadays), left with their Taillow sister for another region, hoping to find new stories to write about. It was a full month later, and there was no package or letter telling the ones that stayed at home in Hoenn (they had moved to a nature-friendly house) of their whereabouts. They were worried. What if something happened? There are rumors of sickness everywhere. The cries came from the Pokemon, and Light, with her delicate paw, called for attention. She told them that she would go to each region and look for Elder Author and the Taillow herself. She would not risk their lives for whatever danger there was- she was their mother figure, after all, and she couldn't hang them out to die in worry. Light would look through each region for a month, and if no sign of them was seen, she'd go to the next region. She vowed to the Pokemon beside her, that she'd find their friends and bring them back home.

The Glameow was the guiding light, and she'd bring the lost souls back to where they belong. With her.

User Note
- Light only uses black ink in her paintings, which are heavily detailed.
- Her tail tip has remained black from all the ink absorbed into its cotton.
- Same owner as Written in the Fates (Taillow)
- Seeing as I changed her fur into a pale gray, and her eyes green, this counts as the shiny ticket, right?
- Can you hold her off until Kanto Teams are available? If it's possible...

o.o" Uh, change my mind. I don't really feel like being Light- can you delete and/or put her in the dead profiles?

(I have a different Pokemon in mind to travel Kanto...)
Sponsored content