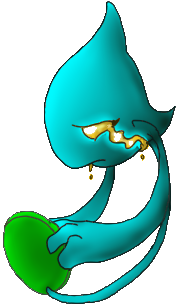 Pokédex Entry-
Each of them carries a mask that used to be its face when it was human. Sometimes they look at it and cry..

History-
"Once upon a time, in the days of old, existed a kingdom near the sea, no lost to time"
And so it did, a beautiful city, over set by a castle overlooking the ocean. It was calm, it was peaceful, and it was oppressed.
"On the throne of the stronghold sat a young woman most Vain and Petty, her ego bloated on power"
And so she was, the Queen of this fair land. A corrupt, vile woman she was, she wished nothing more than to keep her people in her shadow.
"But this woman was afraid of time. She feared the reaper and the end of power he would bring"
The queen, Alice was her name, made a resolution, and tasked the archivists and historians on a mission to find a being she had heard tales of in her youth. Tales of a creature who only awoke every thousand years. A creature who granted wishes.
"Time passed, and the wishmaster was found hidden away, her location uncovered by the unending work of the Queen's vassals"
And so the corrupt Queen, gathered her bravest knights, saddled her steed, and set out to the wishmaster. Finding her, she produced a small quill, and a vial of ink. "I, Alice of the Throne, wish to live forever"
...The wishmaster awoke and fulfilled the wish the very next year, in the depths of night. A just punishment for a vile woman such as Alice was swiftly given, and her human form was banished, leaving behind a small spirit, clutching a mask tightly to her. This creature, a Yamask colored to match the Queen's dress, was sealed away in the crypts under the castle, a symbolic Guardian for the Tomb of the now missing queen.
This was 1500 years ago.
Recently, a psychic pulse tore through the ruined city, and Alice awoke from her slumber to find herself once again under the sun. Half mad with time and rage at what had been taken from her, she set out for the nearest settlement, hoping to impose her rule. Hoping to find the wishmaster that cursed her.

Appearance-
Alice is a Yamask of average size, with a green mask and an Aqua body (skin, flesh? stupid ghost terms). She is often staring and weeping at her mask, which, like all yamasks, bears a image of her face from when she was human.

Personality-
Very vain and petty. Is also hateful towards most living creatures, specifically those than can change shape

User Note-
-Based off the 3rd Alice of "Alice of Human Sacrifice"
-Is shiny
-I have permission from Jirachi to use her in the history and plot for this character.
-Readopted from Ciana
Mewtwo

Yamask is #562, Cofagrigus is #563.
That is my only note but such a minor typo will not hinder approval.