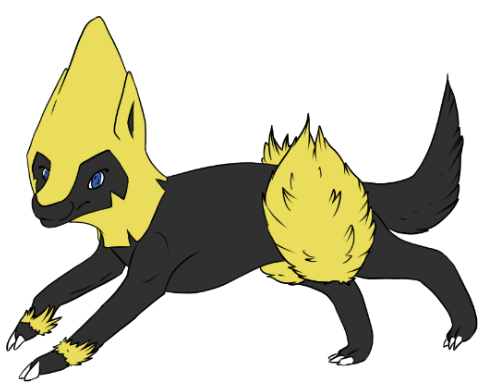 History;
Born as the only son in a litter of three, Nokes never knew his father and spent his childhood caring for his sickly mother and two sisters. Despite his identity as the runt, constantly fighting for his fair share of food, responsibility was soon thrust upon the youngster as the family descended into a state of poverty. His mother, a traditionalist in the belief that the males were the strongest thus the breadwinners in a family, soon ordered Nokes to hunt. Nothing but a clueless child, the youngster received no guidance – simply expected to return with enough food to keep his family alive and well. Despite his own poor health, the canine was determined to succeed, training hard as he taught himself how to hunt and survive the merciless world around him. Yet his achievements were always met with silence, no ounce of appreciation crossing the faces of his loved ones whilst he was expected to sacrifice his own health for the sake of the girls.

A bleak existence, Nokes was robbed of his childhood. Although an intelligent canine with a startling capacity to learn quickly and effectively, he was desperately lonely. His family gave him no support, no comfort, simply using him as a means to keep themselves well fed. Unsurprisingly, the youth grew bitter yet lacked the strength to rebel altogether. He continued to hunt for them, sacrificing everything whilst they spent their days lolling about on the plains in which they lived. Instead, he took out his anger on the unfortunate creatures he targeted. An able killer, the Electrike grew increasingly sadistic in his means of disposal. Whilst he once struggled to capture as little as a Rattata, Nokes learnt how to harness his strength over the years and took delight in the fact he was considered a being to be feared. Indulging in unnecessary torture, the youngster adored the rush of power that would come with the loss of someone’s life.

At the equivalent of his mid-teens, Nokes had had enough. Sick of being walked over by his unappreciative family, he lashed out at his mother following a particularly heated argument before deserting them altogether. Content in the fact that they would either learn how to survive alone and abandon their out-dated traditions, part of Nokes hoped that they remained stubborn. He imagined it would take a death in the family for them to realize exactly how helpless they were – the Electrike was pleased to be finally free of their burden.

Travelling the region at his leisure, Nokes soon found boredom washing over him. An incredible anger still bubbled beneath a calm surface, unable to dissipate the emotion as he simply kept himself occupied by hunting more often. He didn’t eat half the things he killed, simply using it as an excuse to both train and vent out his frustrations. However, his simple life came to an end when he was captured by a human. He was muscular monster of a man, yet he was surprisingly soft-spoken and kindly towards his new pokémon. Nokes didn’t trust him, unwilling to obey any commands until the human introduced him to a completely foreign way of life. The man worked in an abattoir, requiring a pokémon for the sake of keeping the many Mareep and Tauros in order. Nokes soon found that he was perfect for the job.

Unfazed by his gory surroundings, the canine quickly took the macabre life and began actively enjoying sending hundreds of terrified livestock to their deaths. Regularly trained by the human throughout the decade and a half in which he worked within the slaughterhouse, Nokes soon grew into a powerful but incredibly malicious young man. The control, the power, which accompanied the job soon went to his head, the canine constantly exploiting his rights as he developed a spiteful habit of abusing the livestock as they awaited their inevitable slaughter. Building up a complete lack of empathy, the electric-type took a wicked pleasure in tormenting the ‘meat’. Regularly beating, or ‘tenderizing’ the flesh of the stock, Nokes was condemned as evil, topping off the physical attacks with malevolent mind games. In this time, he evolved into a Manectric, yet his personality only continued to spiral into the very depths of iniquity.

Nokes sent hundreds, if not thousands, of pokémon to their death in the abattoir, no flicker of remorse for his crimes as he often took to gloating about his cruelty. Feared by those who had the misfortune of meeting his smug grin, the canine’s reputation scared even the humans who were meant to control him. Of course, there was no control. The men had lost their influence on the electric-type long ago and now, Nokes ruled with unrivalled sadism that remained entirely untameable. He was deemed a monster to all.

However, his reign of terror came to an end with the epidemic .The undead were quick to target the abattoir, considering the already blood-soaked building a true feast. Nokes, whilst repulsed by the foul appearances of the infected, was mainly unfazed by the destruction of the world he’d known best. The meat would have died anyway, the fact they were ripped to shreds by monsters only added to the building’s macabre atmosphere. In fact, part of Nokes enjoyed the massacre. He watched the scene, fending off any plucky undead unwise enough to target him with a few bolts of lightning, before strolling from the building altogether. Sealing any survivors within the slaughterhouse, the Manectric didn't look back as beautiful screaming filled his ears, a smile playing on his lips.

Nokes’ famous pride was weakened through the course of the epidemic. He was no longer in control of his world, and was particularly bitter to find he had fallen to an almost primitive state. But he learnt to accept it. He was reshaped as a survivor.

His arrogance and spectacle-violence gradually dissipated as the hound placed an emphasis on satisfying his most carnal urges – hunger, violence and lust. Nokes was happy to live this way, still dangerous and utterly repulsive to the survivors who had the misfortune of meeting him but a more developed creature in comparison to his younger self. No longer a sadist, Nokes lives the life of a survivor.

Appearance;
Larger than average with a muscular, clearly powerful frame, many would think it ludicrous that Nokes had been the runt of the litter. Years of vigorous training, forced into hunting only weeks after he’d hatched, the canine’s healthy physique clearly boasts his physical capabilities and the power he has learnt to harness over time. As a shiny, Nokes is pure black and vivid yellow in colour, providing a lasting and instantly recognisable image to those who have the misfortune of meeting him.

Once handsome, Nokes’ youthful looks are now a thing of the past. His sharp features made haggard by the epidemic world, the canine’s defining feature is his crusted, disease-ridden eye. A pebble is lodged in the socket, the eyeball burst in a standoff with a harbinger – yet Nokes made no attempt to spare himself the pain of the ensuing infection. He considers it punishment for sustaining the injury in the first place, a personal reminder that he needs to grow stronger. His remaining eye is a piercing silver.

Nokes, by his own admittance, is not a nice guy. Famed in the abattoir for his utter lack of sympathy, the canine is a ruthless creature capable of heinous crimes. Whilst a lot of his youthful bravado and unnecessary sadism was lost over the course of the epidemic, the Manectric is still a force to be feared. Physically powerful with a violent temper once it had been thoroughly provoked, Nokes kills without remorse – quietly enjoying the opportunity to exert his strength and control over someone who lacks it. He enjoys the rush of power and yet hides his glee behind a stony mask.

Spiteful and malicious when he has been wronged, Nokes will usually ignore jibes and taunts, confident in the knowledge that he is the superior being. However, there is only so much the canine’s surprising tolerance can take. He indulges in both mental and physical abuse, eager to infect his victims’ mind until they are begging for the release of death. He’ll find their weaknesses and break them down, slowly and methodically. Once wronged, Nokes’ revenge is truly chilling.

Undoubtedly intimidating, the canine is quietly proud of his ability to evoke fear in others without saying a word. His appearance speaks volumes, promising company of his identity as a violent and domineering force. He is an able battler, capable of looking after himself to the extent where he considers himself a true survivor. His endurance is his sole priority. Nokes is not loyal, never a team player and will unashamedly use others to achieve his own aims. He desires only the opportunity to say he was a survivor of the epidemic, the pride in knowing he has mastered something apparently untameable.

Nokes is a solitary creature, quiet and thoroughly unsociable. He has no friends and has no true desire to change that – at least, not explicitly. The Manectric has been deprived of connection all his life and naturally, part of him is curious to this foreign concept of loyalty and love – especially concerning the opposite gender. He will use women to satisfy his own needs – perverse and aggressive in his pursuit – but often finds himself enchanted by them despite his better judgment. Women are Nokes’ true downfall. Were the right female to appear, someone who could hold her own against a creature such as Nokes, she could find herself with the power to control him.

Whilst by no means a coward, Nokes is definitely not the heroic type either. Those who cannot save themselves deserve death, so he will sit at the side-lines watching the scene unfold. He will not go out of his way to help another, no matter what kind of loyalty he is meant to show towards them. He merely sees no reason to involve himself in the concerns of others.

Egotistical, Nokes is a proud creature and does not take kindly to any sort of failure. He is constantly striving to better himself; to achieve the next level of greatness and ensure that the whole world plays witness to his constant evolution. In the event he falls short – Nokes’ hatred intensifies, spreading to not only the enemy but everyone else and even himself. His defeat at the claws of the harbinger Xatu came with self-loathing, the canine punishing himself with the ensuing eye infection that continues to eat away at his face. In a warped way, he keeps himself grounded and thoroughly disciplined.

User Note;
- Named after and loosely based off the character of Sean Nokes from ‘Sleepers’. Nokes’ character is also inspired by Vladis Grutas from ‘Hannibal Rising’ and Sandor Clegane from ‘Game of Thrones’.