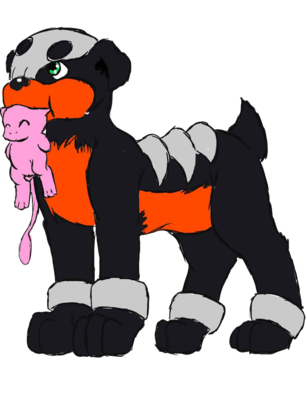 Pokédex Entry It is smart enough to hunt in packs. It uses a variety of cries for communicating with others.
(Black/White 2)

Waylon was born in a land considered neutral grounds. Here any species of Pokemon could coexist with another. He was the only Houndour puppy however. Waylon’s mother and father were pretty much the peace keepers of the area so the pup was alone a lot. Waylon never minded. He could entertain himself for hours chasing his tail or anything that moved. To Waylon life was a simple, leap, skip and bound to enjoy it. Any training done by him was something he convinced himself was fun. He pounced on sleeping Oddishes and chased Rapidash and Ponyta excitedly. Catching up to the fast moving Pokemon was the best thing ever to him but the repercussions of being chased back to the den by angry parents was different. Waylon liked to chase not the other way around. He stayed inside after that and just rolled rocks around with his paw. Then came the times his mother was actually with him. The beautiful graceful Houndoom always strived to have time for Waylon like she made for the other Pokemon.


Waylon was mostly trained and taught by his mother because of this. He didn’t mind in the least. Waylon was the variant of a human momma’s boy anyway. She showed him the lands they lived in and how to correctly settle an argument between Pokemon. Waylon liked that. She told him someday when he got older, he could get the red tattoo on his shoulder like she had. Waylon liked that too. But for now he was given a little toy that she had found to keep himself entertained. That was something else Waylon very much enjoyed was the little toy. He kept it between his paws or in his mouth at all times letting no one but his mom touch it. Thinking all was well and always would be, Waylon neglected training to become a Houndoom just as the Epidemic rolled in.


Waylon couldn’t remember what was all happening. His mom had picked him up by the scruff on his neck and placed him on a Dragonite’s back. He wanted to know what was happening but she just licked his nose and gave him the little toy before sending the Dragonite off. Waylon whimpered and howled sadly for her not knowing where he was going until… The Dragonite dropped him into the center of a city. Waylon ducked into the nearest bush and looked around. What has happened? Where was he? He only hoped his questions would be answered in due time…

Houndour is a dog-like Pokémon with short, black fur. It has a red underbelly and snout. Houndour has short, pointed ears and a tail. Houndour’s fangs protrude out of its mouth, and its nose is dark in coloration. There are white bands on Houndour's ankles, and more rib-like ones on its back. Houndour appears to have a simplistic, stylized skull on its forehead, with the orbits looking much like ‘eyebrow’ patterning commonly seen on dogs. Houndour also has circular, red-colored patterning on the underside of its paws.

His eyes are also a striking emerald green


Personality
Waylon is like any pup, he’s cheerful and rejects any attempts to damper his mood

When he talks, he sounds like he has a runny nose

Gasps and points at people when they swear and says “ooooh you said’a swear! I’m tellin’!”


User Notes
His father was indeed a Houndoom

Cause you're deliciously adorable
Mewtwo

He is far too young to be so high of a level. Toddlers must be under level 10. No exceptions.

All moves must be labeled how they were learned including natural ones.