Pure and Casanova the undead Sawsbuck and Zebstrika [Inactive]

Pure and Casanova the undead Sawsbuck and Zebstrika [Inactive] 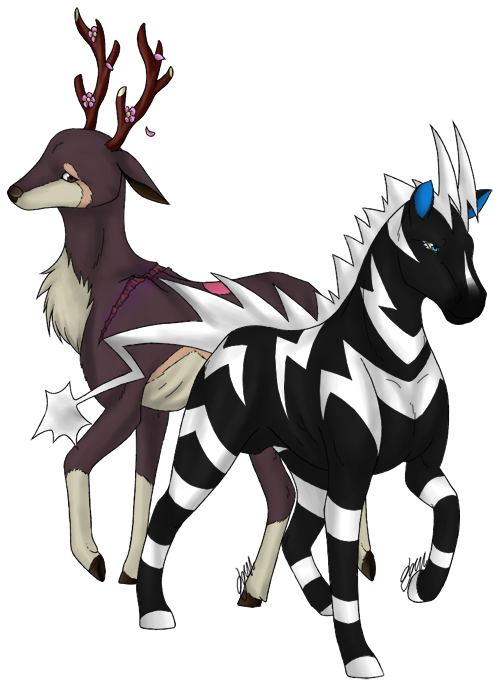 Pokédex Entry: "They migrate according to the seasons. People can tell the season by looking at Sawsbuck's horns."(Black Pokédex)

"The plants growing on its horns change according to the season. The leaders of the herd possess magnificent horns."(White Pokédex)

Item-
Currently holds no item; she lost the Red scarf during battle in Icirrus.

A Red scarf given to her by Paladin as soon as the reunited. Pure hates it with a burning passion as soon as Paladin left Icirrus, but keeps it for the sake of being recognizable.

- -- --- ------------- --- -- -
History-
From birth to early years, Pure lived a life where she was isolated, and alone. Despite her shininess, her parents found that it was better to keep her away from the outside world, where no one could see her, that way, she would never be snatched away from them. Pure and her siblings were all treated equally, all of them also isolated from the outside world. That was until, it was Pure's birthday.

Pure's birthday zoomed by fast, she went outside for the first time, under her parents' supervision of course. Her parents would watch from afar, that way the Deerling could have time to herself if she were to feel like it.
On that very day, she had met a troublesome two; Prince, the Shiny Axew, and Paladin, the Deino. The two had met at a cliffside. Paladin was the first she had met, Pure was shy, but she had introduced herself nonetheless. However, shortly after introductions, Pure and the gang was immediately attacked. Leading to Pure getting captured.
During her short captivity, she was bullied by the trainer's Pokemon, who taunted her for being different, and physically abused her. Luckily, Prince and Paladin helped Pure escape, smashing the Pokeball that kept her from leaving. Their lives resumed, Pure's parents were unaware of Pure's capture, continuing to let the Deerling roam free outside.

Every day, the group would meet at a very cliffside, where they would continue their loving adventures. Little did Pure know, that she had an infatuation with Paladin, where in some days, she would hope the twosome could be together. Prince being the right hand man.
Not many days later, the plans had change. Prince mysteriously disappeared under circumstances. Leaving Pure and Paladin to talk about their days quiet by the cliffside, things were awkward at first, sad, but they got the hang of it after a couple of days.

The days slowly became painful for the little Deerling, as Paladin began talking about another; Melinda. Melinda seemed to be a fascinating Pokemon according to the Deino. Most days became talks about her, and how they would have bold and fun adventures. Leaving Pure with such a strange feeling in her heart.
Time became slow for her, each day, Paladin would stop visiting the cliffside, Pure would always wait there - like a loyal friend - until sunset. Hoping the Deino would return.

He did return. Only to fantasize more of Melinda. The Deerling felt the unknown emotion burn inside of her, but she left it alone, tolerating it. Their days of happiness and joy returned. Paladin and Pure would often go to the Dragonspiral Tower, to play with all the Pokemon in the tower that close friends with them.
They got chased out by an Angry Druddigon.
Pure and Paladin found it funny when they got chased out, but when the tower Pokemon got chased out, it was depressing, especially since it was their home. The Season Pokemon prayed for them to have a home.

As time passed, Pure's days were normal, her enjoying her carefree life with Paladin.
That was until, the Epidemic came.
The Epidemic immediately attacked the forest Pure had once knew. A wildfire - started by a Heatmor - killed many Pokemon; Including Pure's parents.

The Deerling was back in depression. She was rescued by Paladin in the fire, and her siblings had survived with her. With no home, Pure and her siblings decided to leave the area, leaving Paladin. The Season Pokemon was reluctant, but knew that Paladin and Melinda were to elope, and escape to Johto.

Thus the group had separated.

Due to the Epidemic, her siblings had caught hold of the disease.
One day while playing tag, her older brother was hungry, biting off Pure's tail. The Deerling was surprised, and got scared as her sister and him began targeting the youngster. Leaving Pure whimpering off, running away from home.

She slowly became infected, then undead. She still had her consciousness intact. It was a miracle.

A tiny miracle in her life.

In the fury of a snowstorm, a figure can be seen from afar. Deer-like, but not looking fragile. It was defiant with it's dark brown eyes that's tinted with blood red.

The Sawsbuck is like any other Sawsbuck despite her Undead stench. Pure's colors are much more duller and darker, the cut on her back looking more like a scar by the day, however, now tinted with some purple. Her bitten tail is still covered with dry blood, but healed.

Personality-
Pure became much more stubborn after Paladin's leave, she is easily agitated and much more grumpier than her usual. Only smiling around those she trusted the most. The Sawsbuck is rather fragile due to her poor health as leukemia came in. However, because she's also undead, she rarely feels the pain, but often stays in one place and prefers not to move unless needed.
Those with the same type of personality as Casanova's (cocky, arrogant, always up in your face for attention), surprisingly calms Pure, despite her wanting to tackle him for ruining her thoughts (those thoughts are often what makes her much more grumpy, and are often thoughts of Paladin).

> Has been infected for months and now recently joined Undead ranks. She's been infected since the second month of the Epidemic and Undead for a couple of weeks.
> UPDATE 11/3/12; The right side of her face is now burnt off.
> Pure's Text; #F0AAE0

Pokédex Entry: "They have lightning-like movements. When Zebstrika run at full speed, the sound of thunder reverberates."(Black Pokédex)

"This ill-tempered Pokémon is dangerous because when it's angry, it shoots lightning from its mane in all directions."(White Pokédex)

Item-
No items are in his possession

- -- --- ------------- --- -- -
History-
Casanova never changed. He hated change. He disliked it greatly. When he was in his younger yeas as a Blitzle, he was still the cocky arrogant little bastard that puts himself before everyone else. The zebra-like Pokemon lived in a tiny quiet forest near the coast, it barely had a population, but there were mostly small families of forest Pokemon living in that quiet forest.

In Casanova's first meeting with the other forest Pokemon, he acted like their king, using physical and emotional threats to make them respect him. In as little as two weeks, basically every Pokemon that was his (or younger of) age was under his command.

This one, was a shiny Deerling known as Pure. She seemed innocent, easy to manipulate, yet Casanova -- no matter how many threats -- was unable to make her bow down to him. The Blitzle was irritated, beginning to hang around the young deer Pokemon in order to find out her weakness. Pure's family recognized Casanova as just a close friend of Pure's...

Until Pure met up with a young fellow of a Deino and Axew; respectively known as Paladin and Prince. the Deerling began to go out of her isolated home much more often, leaving Casanova always waiting for her with a frown. He felt bitter without the Grass/Normal duel-type and finally realized that he wasn't around just because he wanted her to see him as someone high and mighty, but as that one special someone that would be happy to protect Pure.

But on this one, supposedly-normal day, a fire broke out within the forest. Casanova's family was the first to be taken, the Blitzle -- young at the time -- ran off, leaving the forest... That was until, he remembered Pure shortly after his leave. Filled with regret and despair, the Electric-type took out his anger at wild Pokemon, evolving to a Zebstrika. He began to hate change. No one respected him, he looked different, and Pure wasn't here anymore.

He soon found out that the cause of the wildfire was a wild Pokemon that was 'unlike any other, and hungry for meat'. Casanova's thoughts of Pure was put on hold as he began to investigate in these strange attackings. Most of them ended with Pokemon's families getting eaten. That was just the beginning of the Epidemic.

Months into the Epidemic, cases began to grow worse in Casanova's new home, despite him now being respected as he took 'his' people's complaints into his hooves, he grew much more weary of the attackings. One suddenly caught his eye, however, a somewhat Shiny Deerling whom killed the son of a Gloom family for food. The Zebstrika was damn sure that had to be Pure. It was a slim chance, but this place was quite close to her old home.

With a quick goodbye, he left his safehouse, off to find the Deerling that he once kept close.

A yellow streak of electricity races through the desert. As electricity crackles, a determined pair of shocking blue eyes are ready to fight.

Casanova has the same physique as regular Zebstrikas, but is rather more masculine than normal ones, because of this, he is slower than the average Zebstrika.

Personality-
The Zebstrika is still cocky and arrogant, putting himself in front of others. However, towards Pure, he is rather more of a flirt, than his outer king-like personality. Despite this, he had no idea how to deal with situations with death and personal problems. Thus he sucks at comforting. But hey, at least he tries at times (though sometimes it makes it worse).

> Casanova's Text; #BFC74C
> He still likes Pure
> Despite him helping out families when he was in his new home, he still doesn't know how to comfort others (he was just there to find out what was going on)