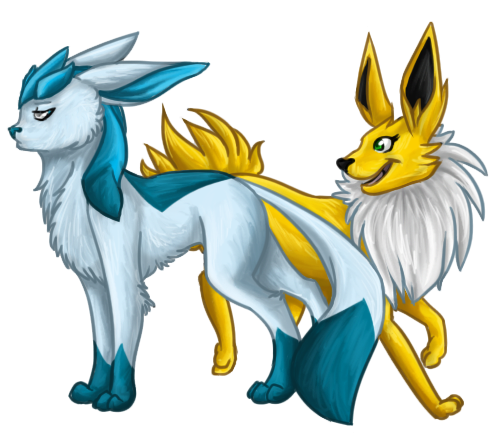 pachirisu:
Aloof
A free spirit Pachirisu is a bouncy ball of energy and smiles. Pachirisu is very happy Pokemon, always smiling she loves to giggle and make silly jokes, as Glalie once did all the time. Very playful and bouncy she seems to have endless energy though that may be because of her species. As long as she‘s with her best friend of a companion, she‘s smiley and cheerful, bounding all over.

Ditzy
She isn't the smartest. Often saying stupid things, squealing like a child, or behaving like one just to see what happens. Whats the point of being free to explore if you cant test your new limits?

Go-to
She loves everything that this "adventure" has given her and wishes to make the most of it. She will do most anything asked of her and wants to try or explore everything. If something needs to happen she will give it her all and be the one to carry that weight.

Disconnected
She doesn't really understand the seriousness of things. Many things go over her head or she will bluntly ignore facts. She calls Glalies Frost Breath attack Ice Beam, even though she knows it isnt just because she wanted him to know the attack. The Epidemic is a hard topic for her. The undead are dangerous monsters but infected are still Pokemon.

Loyal Bond
After years of being together the pair have formed an almost primal bond with one another. The Jolteon herself couldnt stand to be away from friend as a child and being together with him for so long as given her plenty of time to learn his habits and motions. Without much verbal communication from the males part, the two have had to bond even closer. Years of practice allow them to still be able to communicate through Glalies expressions and signals, and simply being old friends really helps.
Pachirisu prides herself for being able to read him. She is proud to say that he needs her to communicate and does so with honor.

Anxiety
That being said, if anyone makes any sort of a remark against Glalie she gets very defensive, and even violent, to protect him. Her fur will instantly spike up with rage. Pachirisu will gladly sacrifice herself for him, and attack others even if she thinks of them as friend. He is all she has and any strike at him detrimental on her mind.

Fragile
Physical abusive then damage control duty has left her in a bad state. She has a temper and emotional problem, a hard fear of fist attacks and other raising their voices. She will behave both submissively and sassy, unable to function when under stress of any kind. If someone jabs at Glalie's lack of speech, she gets extra violent.

Love [Anxiety]
For Pachirisu her friendship has slowly blossomed into a love she has not realized yet. When Glalie isn't around, she gets very distressed and desperate to find him to the point of pacing, and is unable to settle without him. Its as though her world is collapsing around her. Without him, she will shut down and turn on others, attacking them even as she may think they have taken the Glaceon away. She will be unpredictable until 'her JuJu' is returned to her and as such hardly ever leaves his side.

Follower
Pachirisu is like a puppy to Glalie, and goes off his lead, following him anywhere. Yet she also needs his opinion for a lot of her own decisions. While she has her own mind and ideas its not very often that she makes leading decisions. She tries to mimic his old behavior, to keep his verbal spirit alive between them, and enjoys trying to do so.

Motherly
Simply adores children and loves her friends and will do anything for them. May be careless if they are in danger. Not afraid to use 'the ultimate sacrifice' if the situation calls for it in her mind. Wishes to be a martyr but is terrified of dying and what it will do to Glalie, but still willing to do so.

Peace
Pachirisu feels that with Glalie, things will always be alright. That her worries are meaningless and all will be well. He's a safety net for her, keeping her sane and safe from pain, but also so much more. She has placed him upon a pedestal and no one will change that.

Aversive
Being beat at a young age has left Pachi was a fear of hands. Its small now, good humans replacing the fear with good feelings, however if a fist is raised in anger she will start to panic. Submission and a negative view of the person (or humanoid mon) will follow and probably stick for a while.

I think we are ready for approval.
Mewtwo

Last Resort is a Tutor only move and does not pass down in breeding. Only in Crystal did Tutor moves ever pass down but we go by Gen V rules.

Thats odd because it passed between my Eevee's in my White game.

Regardless, edited for Quick Attack.
Mewtwo