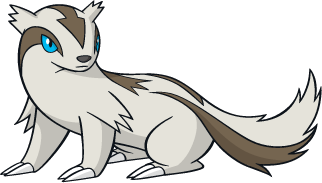 Name- Prudence
Text Color- #666633
Item- Cheri Berry
Gender- Female
Age- 25
Species- #264 Linoone/The Rushing Pokemon
Height- 1'08"
Weight- 71.6lbs
Pokédex Entry- It charges prey at speeds over 60 mph. However, because it can only run straight, it often fails. (Sapphire Entry)
Level- 37
Ability- Gluttony
Nature- Bold
Characteristic- Strongly Defiant
Moves-
-Fury Swipes
-Ice Beam(TM)
-Mud-Slap(Egg move)
-Headbutt
History-
Prudence was caught at a young age when she was just a Zigzagoon by a nice man named Richard . Richard caught the Zigzagoon to be a pet for his family of 4(his wife, his son, his daughter, and himself) in the Johto region. Prudence loved her life with this family, they cared for her and she returned the feeling of love. As time passed by, the family grew older and the son of the family, a boy named Chris, wanted to go out on his own journey. Richard let his son take Prudence as his first Pokemon. Chris thought he would become a Pokemon trainer like all of his other friends. Catching Pokemon, making friends, earning gym badges! However, after he had earned his fifth badge and Prudence had evolved into a Linoone, he discovered the career of a Pokemon Ranger. Chris wanted to help other Pokemon, and he signed up to become a Pokemon Ranger with Prudence as his partner. The two were a great team.

Some months later, Chris heard that his father was gravely ill, and Prudence and Chris returned home to take care of the man. Prudence grew very worried for the two people that were most important to her. Not only was Richard unwell, Chris was starting to not sleep at night due to taking care of him, and when he did have time for rest, he lay in bed, worried. The day came when Richard passed away. This left Prudence and Chris devastated. For a long while, Chris refused to leave the house, the house he grew up in, and Prudence didn't mind it in the slightest, as she was also quite shaken up. As months passed, Prudence thought Chris was getting better. A few days later, Prudence was released. "It's for your own good." he said. Prudence was upset, but respected his decision and left.

Prudence soon began to notice in her time in the wild...something wrong. Pokemon in the wild were acting strange and it felt like there were fewer each day. Her suspicions were confirmed when she began to see Pokemon turning upon Pokemon in vicious killings. Becoming scared and worried, Prudence fled to the place she once called "home". Upon her arrival, as she walked into the house, she screamed at the sight awaiting her. Her trainer's body, without any eyes, intestines ripped out and the floor stained with blood. Prudence broke down completely. First sadness, then anger, then desperateness, then panic. The Linoone ran out of her home and left it for good, not completely sure what to do. All that mattered to her was to avenge her beloved trainer's death and survive.

Appearance-Prudence has the appearance of a normal Linoone.
Personality- Prudence is a loner most of the time. She prefers to keep to herself, and can come off as cold at times. Prudence tries to come off as serious and strong, but she is actually quite caring for the ones she calls friends. Prudence has a protective attitude, and she will fight for a friend. She is also very defensive over her personal life, and does not like to reveal it.
User Notes-
-She carries a Cheri berry with her, as it is not only her favorite berry, it also reminds her of her trainer's red hair.
-Does not have a very good sense of humor
-Father was a Krookodile

Pokedex entry must be from the games. Anime is not allowed.

Father Pokemon must also be stated in User Notes to verify lineage of an egg move passing down.