Susan the creul Umbreon with a laughed at name [ Abandoned Team, Heonn]

Susan the creul Umbreon with a laughed at name [ Abandoned Team, Heonn]

Picture drawn by me.

Pokédex Entry- When darkness falls, the rings on the body begin to glow, striking fear in the hearts of anyone nearby.

Susan began life as a wild pokemon; his father whom of which was another eevee left his mother before he was born. His mother hoped for a girl, but instead she got a boy. So she named her son Susan to compensate for the lack of a girl, and babied him all the time trying to protect her son from harm. The result his name, and his mother's actions led susan to be made fun of by all of the rest of the eevee. They called him all sorts of names such as ' momma's boy ' ' wimp ' ' baby'. Due to it he was an outcast within his group as everyone made fun of him including the girls in his clan. One day Susan got tired of his treatment, and in the middle of one night he ran away to get away from both his mother along with the constant taunting. Susan to this day still doesn't regret running away, and still doesn't care if his mother cared about him being gone. Through out the rest of his time as an eevee within the wild he scrounged around like a scavenger for food, and barely could live on meager rations. He stole from other pokemon, and humans to survive. Susan in his early life wasn't all that assertive, as he would run away or avoid other pokemon if they were bigger then was. The only time he fought was if he knew he can win, if he knew couldn't win he'd run away or avoid it. But one day he met his match when he ran into an angry rhyhorn whom of which charged at him for no other reason other then he was too close to it.

It hit him before he could react to it, and broke his leg. He managed to limp away in time, and get away from the rhyhorn down a small 3 feet hole before the rhyhorn charged him again. He stayed in the 3 foot hole overnight to make sure that rhyhorn was gone. The next day he heard a noise; outside there was a young boy aged around 12 to 14 with his parents. The kid stumbled upon the hole, and found Susan there in the hole. The boy returned to his parents, and the boys parents got Susan out of the hole. They took Susan home doctor him up, and over time his leg healed. Susan's leg even though healed still made him limp on that leg. Susan eventually developed a good relationship with the kid, and would have lots of fun with him everyday such as going to parks, walking outside, and etc. He eventually evolved one day during an evening day, but his evolution took some getting used to due to his changed body. So for a week, Susan felt weird as well as clumsy knocking into things as well as losing balance. He eventually got over it, and got used to his changed body. Susan had a red scarf put on him so the kid can tell the difference between other umbreons, and Susan. One day the kid accidentally ran into a angry pidgeotto, and Susan not wanting to see his friend be hurt; attacked the pidgeotto.But got his right eye clawed out in the process; the pain racking through-out his body. Susan managed to chase the Pidgeotto away, but with a cost of his right eye lost in the fight.

The boy doctored the eye, and his parents made an eye patch to cover up Susans eye to hide the awful injury. About a year passed, and life was good. But one night Susan looked out the window, and saw a pidgey lazily flying in the sky. He didn't know why it was flying like it was. Susan thought of it as nothing, and went back to sleep Then.. a window in the kitchen shattered, and everyone in the house woke up including Susan's human friend. The human woke up, and so did Susan hearing the noises in the kitchen sound off.He can hear the boys parents making noise in the other room, and they went into the kitchen so did the boy. For a moment there wasn't a sound, and then there was loud screams in the kitchen. A moment of silence passed; Susan got up to go to the kitchen, but before he can the pidgey from before that was outside bashed through the window, and after Susan. Upon closer examination the pidgey Susan noticed something... strange about this pidgey. It's body was rotted, and it's neck was very badly damaged yet it was still moving, and it had a bad smell that omitted from the thing. Susan already knew by looking at the thing that this was no ordinary pidgey, and that something was wrong with it.

Acting quickly he jumped out of the way onto the floor, and the pidgey followed him. Susan slipped quickly through a crack in the bedroom door, and out of luck Susan kicked the door breaking the neck of the pidgey chasing him with the head falling off as well. Susan ran into the kitchen, and stopped. To his Horror a pack of undead houndor had went through the window, and killed his beloved humans. The houndor quickly noticed him, and Susan jumped out of the broken window the houndor in toe. Outside, people were screaming more undead pokemon were attacking humans left, and right. Susan could not believe his eyes, was this the end of the world itself? Susan ran into the woods, and eventually lost the houndor pack when he ran into a cave losing them. He slept in that cave that night, and awoke during the next. Contemplating he knew something was up with world, and knew deep down inside that the world is changed forever. If Susan had to Survive, he had to get tough or die. The a month passed, then a year; Susan's personality has changed permanently. He was no longer that nice Umbreon that his beloved humans had loved. The epidemic had made him more paranoid, and untrusting as he thought that any pokemon could be one of those things. To survive Susan had to go back to the habit of stealing from humans, or other pokemon. Susan was very cautious about things, and feared that if he made one mistake he'd either end up as the undead or be killed; which made him have a constant fear of failure.

- Susan's colors are that of a typical Umbreon
- Susan has facial scars, but has more scars hidden under his fur from fighting on the streets.
- Susan is blind in his right eye, which is covered by an eye-patch.
- His red tattered bandana is very big, almost as big as a cape.
- Susan's body is moderately muscular.
- limps on his left leg.

Susan has a callous, and downright mean personality. He doesn't trust others, and even if they gained his trust he still will never trust them fully. He hates his name which is incredibly feminine in nature; and gets angry is one makes fun of it. Susan is opportunistic, and kleptomaniac; stealing anything he sees of use for himself.Susan is most of the time a loner, and is seen mostly by himself. He is rather uncaring, and does not care for the feelings of others. He's so truthful to the point of being extremely rude; he never has had any friends, and it's likely he might not have any. He does not have a need, or desire to reach out to others anyway so this isn't much of a loss for him. Susan also secretively fears failure, and defeat. He is also very selfish, and stingy.

- Susan is male, but has a girls name which might make others poke fun at due to it being feminine.
- Susan is easily annoyed, and quick to anger.
- Susan is callous, blunt, and uncaring.
- His name was intentionally uncreative. ( I imagined his mother wasn't the creative type )
- Both the name, and the character were somewhat inspired by the johnny cash song A boy named Sue.
- Susan walks with a limp.
- Susan is my first ever fan character (or pokemon OC whichever way you call it), and first character on this site.
- I made up Susans history as I went along writing it.

Almost done, all I need to finish is the history, and the picture.

If there is other things in the profile I need to fix; please speak up!
Guest

This is now finished, and ready to be approved.
Kaze 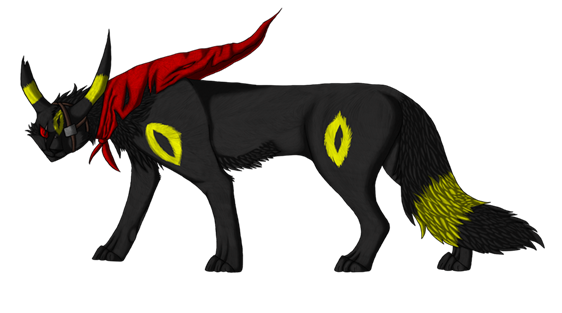 Inner Focus is a Hidden/Dream World ability and is against the rules, they are not allowed. Umbreon's only Ability is Synchronize.

You never state when he evolved, his history made no transition between him being an Eevee and then suddenly an Umbreon.

Oh sorry.. I didn't know they could have that power, and thought they did cause it was in the bulbapedia beside synchronized.
Mewtwo