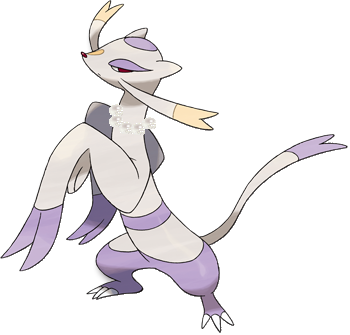 History;
Born in the wilds of Unova, Selina hardly knew her biological family as she was captured by a human within a few short weeks. The teenager was an aspiring trainer, building a team of powerful creatures to help him achieve his lifelong goal of becoming a pokémon master. The moment she was caught, the Mienfoo was destined for a life as a battler and soon had to sacrifice her childhood for years of vigorous training. As the third individual gracing the human’s team, Selina was always a social creature and worked to keep good relationships with her new ‘family’, yet her mind was soon consumed by the thrill of the fight. Revealed to have a natural battling ability, Selina grew strong over the years, her speed and agility particularly notable as she took down countless opponents. Constantly striving to push herself, the Mienfoo wriggled her way to a position of leadership in the group as well as earning herself a special place in her trainer’s heart.

Always obedient to her beloved human, Selina helped him achieve his goals. The team, now filled with quick-footed and talented fighters, defeated the pokémon league of the region, earning a solid reputation in the area as the young man was launched into fame. His newfound status getting to his head, the youth was a brash, impulsive individual with an inability to turn down a challenge. Always ready to place large bets on his team’s abilities, he grew into a rather wealthy, arrogant individual as his team rarely let him down. However, following the group’s immigration to Hoenn, the human met his match in the form of another particularly reputable trainer. Underestimating his opposition, Selina and her team were defeated, pummelled into the ground to leave the human distraught. So confident in his team, the man had developed a gambling problem and in this particular battle had placed a ridiculous bet on his victory. Now, defeated, he couldn’t pay up. Knowing the dangerous man he owed would not let him escape payment, the human was beside himself with worry. Selina, recognising the man’s terror blamed herself, adamant that her boy and her colleagues would find the money.

Resorting to pick-pocketing, the Mienfoo turned a blind-eye to the law as she spent her leisure team stealing from the wealthy. Knowing that her human would need all the help he could get, Selina proved an apt thief as she gradually built up a hoard of money and valuables, her speed proving a monumental blessing for her new occupation. Of course, her human eventually wised up to her antics. Expecting the worst, Selina was pleasantly surprised when he expressed his support. Fear drove him to extremes as he ushered her to continue to steal, desperate to save his own skin and simply give the men what they wanted – if not more. The Mienfoo soon taught the rest of the team her abilities, sculpting them into the perfect thieves whilst she struggled with her own growing problem. Always ensuring to keep a few shiny objects for her own benefit, Selina took a particular liking to a pearl necklace which she had worn since.

Despite the combined effort of the team, their stash of loot wasn’t enough. In his desperation, Selina’s trainer ordered the team to rob a bank in a last ditch attempt to save himself. The team thought it ludicrous, disgusted at the idea and convinced only bad would come from it. Selina however saw a challenge. Accepting the job single-handedly, the female was successful – defying the odds to escape scot-free with sacks of cash for her precious human. Enjoying the thrill that accompanied outsmarting the opposition, the Mienfoo had developed a severe case of kleptomania and was constantly looking to test her abilities. Unsurprisingly, Selina’s behaviour didn’t alter even when the debt had been paid.

In the weeks that followed, the human’s guilt had turned to an unbearable fear that his pokémon’s actions would lead back to him. Fearing the repercussions, he abandoned Selina in the wilds of Hoenn. Distraught and furious at her human’s cowardice, the Mienfoo watched helpless as the human she’d loved and her old team set off to regain their lost glory in the battling world – she was no longer welcome, a menace. Her sorrow turning into a bitter anger, Selina set her sights of surviving. Convinced she didn’t need anyone, the Mienfoo travelled the region at her own pace, a thrill-seeker as she got by on her own exceptional cunning.

Selina spent the next few years moving from city to city, living surprisingly comfortably on the streets as she continued to strengthen through regular training. Reaching her evolution in no time, she gained a reputation for both her thievish nature as well as an identity as a manipulative heartbreaker. Sultry appearance constantly attracting the attention of the males of the street, Selina took no offense or fear from their vulgar comments; instead, she played along to rob them blind. Taking pleasure in her abilities, the Mienshao was soon involved in crime. Often approached to steal certain valuables from human and pokémon alike, as well as spy on rivals of her employers, Selina quickly fell in love with the illicit, dangerous world around her.

When the epidemic hit, Selina cut all contacts with her employers and her numerous admirers who she used for their wealth – intent on keeping herself safe. With no one left to truly care about, the female set off to the nearest harbour with plans to board on a ship to one of the safer regions. However, a mass of undead forced her to take a detour through Fortree City.

Appearance;
Slightly smaller than average, Selina is a slender Mienshao with a reputation as a heartbreaker. Undeniably an attractive individual, the female is of normal colouration but holds a particularly alluring air that proves near-irresistible to the males flocking to her. Light on her feet, the fighting-type’s appearance is as pristine as ever; her living conditions on the streets virtually imperceptible on first glance. Looking out from heavily lidded, luminous green eyes, Selina is quite the seductress.

User Note;
- Named after and loosely based on Selina Kyle from the Batman universe, namely the recent depiction in ‘The Dark Knight Rises’.

Is her image a temp image? It doesn't have her item.

Yes, it is. Sorry about the late reply. ^^;
Mewtwo