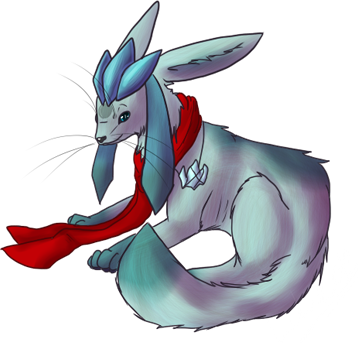 Pokédex Entry-
By controlling its body heat, it can freeze the atmosphere around it to make a diamond-dust flurry.


History-
Meghdad was born from a family of Eeveelutions that were in a day care in the Johto Region. His mother and father were a Glaceon and a Vaporeon who cared deeply for all of their Pokemon. Meghdad was born as a regular Eevee, just like his brothers and sisters had been, but he held the birthmark of a Full Moon. His parents didn’t understand why he had the birthmark, but they loved him just as much as they love their other children. One day, when Meghdad was playing with his elder brother a trainer came into the daycare and asked the owners if he could get an Eevee from them. The owners had seen how excited the trainer was and smiled before they led him to the back yard where he could see the young Eevees. At that moment a Seviper came into the yard and was peering at the young Pokemon with hunter. Its gaze landed on Meghdad’s younger sister before it attacked. Luckily, Meghdad saw the Seviper and used a Powerful Tackle attack to knock the Seviper away from his sister and stood protectively in front of her.

The Seviper didn’t give up easily and continued to try to get past Meghdad to get to his sister, but the brave little Eevee kept on knocking the Seviper away until he finally hit it hard enough to send it flying out of the yard. Afterwards, the Seviper retreated, giving up on its meal to search for an easier meal. When the trainer saw this he told the owners that he would like to take the two Eevees under his care. The daycare owners were surprise that the trainer wanted both of the Eevees but also glad that he didn’t plan on separating the two siblings. Once the trainer had Meghdad and his sister he decide to give them names, which is how Meghdad got his name and his sister was named Shiva. They learned that their new trainers name was Jacob and he raised them well. Jacob had wanted a Glaceon, which is what he told the two little Eevees, and he had asked Meghdad if he would be happy to become a Glaceon. Meghdad gave it some though before he nodded his head thinking that it will be cool to become an ice-type Pokemon. With that decided Jacob took the next ferry to Snowpoint City, in the Sinnoh Region, since he heard that around there he could evolve Meghdad into a Glaceon.

After a while, and after they made it to Snowpoint City, Jacob was able to find the mysterious stone that will help Meghdad evolve and began to train the male Eevee around there until Meghdad finally evolve into the Glaceon he was now. While they were still in the Sinnoh Region Jacob thought that he will help Shiva evolve into a Leafeon. So after he helped Meghdad evolve Jacob went to Eterna Forest and went to the Moss Rock and trained Shiva around it until she evolved into a Leafeon. Jacob was so happy for his two Eevees and for himself and decided to head back home to the Johto Region to take on the Johto League. He even taught some TM moves to both Meghdad and Shiva so they will have a good set of moves. Jacob made it there easily with the help of Meghdad and Shiva and even went up against the Champion in the Johto League and became a champion himself. But right when they were going to celebrate their victory the epidemic hit.

At first Jacob paid it no mind and didn’t leave when the officer’s told him too. He didn’t want to leave his two friends behind because he knew he will be force to release them. But Meghdad got him to change his mind when they face off against an infected Mightyena. Meghdad was able to defeat the Pokemon with his TM move Ice Beam, with the combination of his other TM move, Hail. After the battle Meghdad force both Jacob and Shiva to get on a ferry and was about to join them. But before he could do so a flock of Murkrow and Honchkrow attacked. In order to protect his trainer and his sister Meghdad stood his ground and used his powerful Ice attacks to defeat the flock. When he finishes them off he knew that the ferry was gone along with his trainer and his sister. Now Meghdad is trying to find a way to join back up with them and began his search in New Bark Town. While he was searching for his trainer and his sister Meghdad came across an abandoned Pokemon Egg. With him being his kind self he couldn’t leave this egg behind so he took care of the egg and had it hatch, not too long after finding it, and was glad to see that the Pokemon, which happened to be a Magby, wasn’t an infected Pokemon. He had named the Magby Parmida.

Appearance-
Meghdad is like any other male Glaceon, he has the same appearance as one though the only difference is he has a full moon on his forehead and he wears his Crimson Scarf and NeverMeltIce around his neck.

Personality-
He is very kind and caring to his friends and to children.