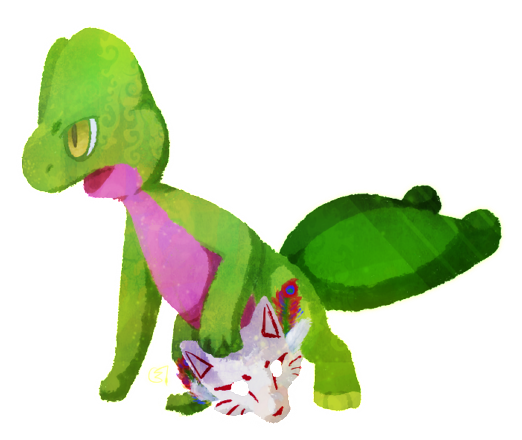 Ability:
Overgrow
Powers up Grass-type moves in a pinch.

Pokédex Entry:
The soles of its feet are covered by countless tiny spikes, enabling it to walk on walls and ceilings.

Item:
Tribal Mask
A mask she wore since her mother's death. She always wears it, and refuses to show her true face to anyone despite the fact she just looks like an ordinary Treecko. Elders in her clan also wanted her to wear this.

History:
A tribe, it's a tribe that she came from. The tribe was located in an isolated, dense forest away from human life, it snowed most of the time too. Nahele enjoyed her life there, despite the many ups and downs, she remained carefree, only to focus on the duties her elders and parents had assigned her to, most of those duties regarding caring for the tribe, gathering berries, etc. Her parents were idols of the clan; Her father was a strong Abomasnow, who would train Nahele when she was done with her assignments, and her mother was a beautiful Sceptile, teaching the Treecko the cultural aspects of the tribe.

It was a happy life really, it was very exciting as well, with all these tasks, Nahele didn't worry of anything else.
So then her happy life continued, she had reached that point in age where they had to wear handmade masks. Nahele knew how to make them thanks to her mother helping her practice for this day, however she couldn't cut them since she had nothing sharp on her. Thus her mother had to cut them, Nahele of course, guided her mother on the shapes the Treecko wanted, wanting this mask to be as perfect as possible.

The mask had a fox-like shape, the Treecko loved it, adding the feathers that the bird Pokemon of the tribe had provided. It was a beautiful mask, having an earthy color and natural colored feathers surrounding it. Nahele wore the mask all the time, even when the elders say to wear it only on special occasions, the Gecko wore it 24/7.
A wonderful life indeed.

That was up until her father suddenly broke out. He was angry at her mother for some reason. Nahele watched from the treetops of their fight, feeling her stomach churn. Never had her parents fought up until now; the Abomasnow was cursing on how she had broke tribe law and cheated. The Sceptile seemed frightened, saying, "I'm sorry" over and over. Nahele had no idea on what to do, she didn't understand tribe law much, but her mother breaking it? It was impossible, she had dedicated much of life to it.
Then something impossible happened; her father murdered her mother. The Treecko watched the scene, she would have jumped in there before the last blow, but she didn't want to die. Instead, she ran for it, back to the tribe, making her presence known.

By the time Nahele reached the tribe, her father caught up to her, ready to get rid of his child for watching such a scene. The Wood Gecko Pokemon just simply cried for help, and her father was taken down by several Woodhammers. Nahele was alive and well, but felt her stomach churn, both of her parents died in front her. And she did nothing about it, though her father was nearly about to kill her, she felt no wrong went undone.

Weeks past since the incident, tribe members dismissed the incident as an accident. Some made rumors that Nahele was the cause of it all, she was the devil child.
This caused the Treecko to be isolated in her clan, she wasn't happy anymore, but she continued to wear the mask that had her pride for the tribe.

That was when the Epidemic was able to hit her tribe. The one that had been isolated from society for a long time. All of the tribe members died; from gorey deaths from the infected/undead, to being insane for being alive and suiciding, to becoming the undead themselves.
Nahele was alone again, but this time, she ran from the tribe, didn't want to hide from the undead any longer. She wanted to take action about this.

She met no one during her journey, but she is about to be in one heck of an adventure.

Personality:
Nahele refuses to take off her mask, as she continues to wear it 24/7. If anyone were to see Nahele without her mask on, the Treecko would feel a huge grudge towards them. However, if she allowed someone to see her without her mask [Possibly], then she probably have felt a lot of trust between her and that Pokemon. If a subject concerning the past life comes up, Nahele would refuse to tell anyone of her's, for it is something she never wants to mention.
User Note:

Re: Nahele the Treeko | [inactive]