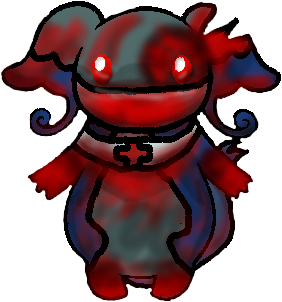 Moves:
Blizzard
Fire Blast
Thunder
Telekinesis
History:
This is the Story of Hurt
Hurt was not always known as Hurt, she was once upon a time known as Bell, but let's start at the beginning first.

In the Unova region a pair of Audino (They were owned by a Nurse Joy) was expecting their 2 eggs to hatch any minute now. The two eggs hatched revealing 2 Audinos, one male and one female. They were named Armando and Bell. Many years later the twins were enrolled into Pokémon Nurse School. They were trained in the Art of healing and being a Nurse Joys Assistant alongside many other Chansy and Audino from across the globe. Bell wasn't happy with her life though, while Armando wasted his time learning moves such as Heal Pulse and how to bandage up other Pokémon, Bell when ever presented with a healing TM or the opportunity to learn a healing move she would turn it down immediately. Armando’s grades were on top of the class while Bell was at the bottom.

The Nurses who ran the School were very puzzled by Bells behavior because you see Bell's parents and pretty much all of her Ancestors were some of the best Students that ever went to this School. Bell was shown over and over again every lesson twice after school in an attempt to get her to learn. Eventually Bell just decided to fake interest and raised her grades to the second highest of the class. That got the Nurses off her back leaving her to invest her time elsewhere.

While on a tour around a Pokémon center Bell noticed a glimmer come from a trash can. Taking a look around to
make sure no one was paying attention to her Bell started to search the trash can with this thought in mind "ANYTHING is better than Listening to that blabber mouth of a nurse go on about the jobs and tasks they would do alongside their Nurse Joy when they graduated." Feeling her hand hit something cold and metallic Bell grabbed it and pulling it out. Quickly stuffing the Object into the fur of her tail Bell went with her classmates through the rest of the boring and repetitive tour.

As soon as the class got back Bell hid in the Janitors closet to inspect the object she got. In the dim light Bell read to herself the one word on it: Thunder. With a grin Bell quickly used the TM to get rid of one of the moves she was required to learn; Heal pulse. Stuffing the TM back into her fluffy tail Bell moved on with her life eventually graduating and at the cereomony golden egg necklaces were given to the Chansey and white collars/necklaces with a red plus sign in the middle to the Audino. The gifts were signs of medical achievement to everyone, but not Bell, to her it was a sign of how she fooled them all into thinking they had trained another nurse Pokémon.

Being sent their separate Ways the twins went to their respective Nurse Joys and that was the last Bell saw of Armando. The Nurse and less than thrilled Audino made their way to Mossdeep City and were put to Work at the Pokémon center. A few days later during her break Bell snuck away from her Nurse Joy and went to explore Shoal cave. After having her curiosity satisfied Bell was about to leave when she was attacked by an odd looking Golbat. The Golbat had glowing Red eyes and seemed to be twitching uncontrolably. It also had Some old looking wounds covering it's now Purplish Grey body. The Golbat lunged at Bell and managed to use a Bite attack on her before getting fried by a Thunder. As Bell shoved the corpse into the water she had no idea that she had been infected.

One night a few weeks later when Nurse Joy and Bell were doing overnight a break in happened Wild Mightyena pack broke inside. The Mightyena's coats were unkempt, greasy, and the Mightyena had Purplish splotches covering their bodies. Some even had their flesh torn away on various parts of their bodies!

While fighting the Mightyena Bell noticed two TM's shining in the Dim light while on display at the Pokemart corner. The TM's read "Blizzard" And "Fire Blast". Then the Nurse Joy Let out a Cry with several Mightyena about to maul her to death leaving Bell with a choice between her and the TM's

Bell chose the TM's and Quickly breaking the glass grabbed them and Locked herself in the Operation Room getting a glimpse of a shocked Nurse Joy being torn to shreds by hungry undead Mightyena. Bell didn't even feel sad when the Nurses heart stopped beating. With a smile Bell used the TMs to delete Wish and Heal bell leaving only the Moves Thunder and Telekinesis left of her previous move set. Too absorbed in her newfound freedom Bell didn't notice that one of the Mightyena had made it in with her. With a howl the undead beast leapt at the hearing Pokémon crunching down on the right ear. As a sickening "Rrrrrrrrriiip" split the air followed by a cry of pain from Bell. Levitating the Mightyena into the Air with Telekinesis the Mightyena swallowing the part of Bells ear he had torn off then let out an Incinerate frying the lower half of Bell's face and the area around her right eye. That was the last straw for Bell as she froze him to the wall with a Blizzard before following up with a Thunder on the hyena-like Pokémon. She watched giggling like a maniac as it the hyena-like Pokémon thrashed around in pain as it started foaming at the mouth. When the thrashing stopped Bell ended the Mightyena's life with a Fire blast to the face leaving only ash piled up on the headless corpse.

The Audino's wounds finally got to her though leaving her to a painful death by blood loss. Later that Night the impossible happened as the Corpse stirred and stood up. The Audino put on a germ mask hiding the mess that the lower part of her face had become. Murmuring to herself as she looked into the pool of water that had formed after the Blizzard melted the Audino spoke "I am Hurt"
Blasting her way out of the Pokémon center Hurt said to herself in a monotone voice
"Now is the time to Hurt, not heal"
Appearance: The area around her right eye is bloodstained and has no skin under the blood due to it being burned off. Her right ear is torn and has blood around it. The Blood stained Germ Mask Hurt wears is to hide her disfigured mouth and lower face. She also keeps her Pokémon Nurse School graduation necklace/sash. The Usual Pink and Cream with a white tail coloration has rotted into a Purple and Grey with a lavander tail coloration.

Personality: Hurt cannot stand to be around living beings unless they are of some use to her survival. The reason is because of her sensitive hearing she can hear their heart beats; this drives her crazy because her heart doesn't beat. She is also very stubborn and it takes a lot of skill to get her to follow someone else's plans.

User Notes:
Hurt's main weakness is her lack of healing moves and main tactic being 'Blast all enemies into Oblivion'

Hurt is fairly Smart for an Undead, it might be because she is very stubborn thus retaining more control of herself.

If your Undead or Infected and don't tick her off then you have a better chance of being considered an ally by Hurt.

The Pokémon Nurse School actually exists in the Pokémon Anime. It's the one Jessie went to (She dropped out eventually because she wasn’t a Pokémon and thus could not learn sing) and met Blissy (The one from: Ignorance is Blissy) at.

Hurt often carries Items that intrest her in her fluffy tail using it as a storage space/area.

I'm sorry to tell you this, Shadow, but I reserved the last spot in Celadon.
Guest

Thats okay I just need to change Celadon City into Mossdeep and everything will be fine and Hurt can go Terrorize the pokemon there instead :)
Mewtwo

If she was only infected during the attack she wouldn't have been infected long enough for it to bring her back to life. She would have needed to be infected for at least a little while before death in order to come back as an Undead.
_________________

Okay I'm just going to assume that by a little while you mean a few weeks so I made Hurt get bitten by an infected Golbat a few weeks before Dying.
Mewtwo

Actually that is a perfect time frame. Well done.