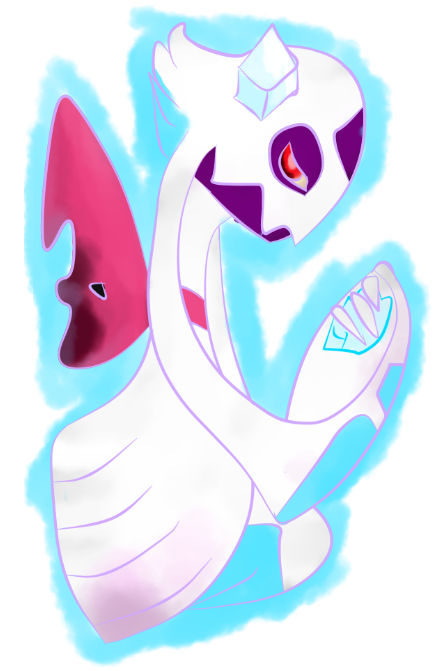 History-   Life and Death. Concepts often not associated with once you are technically dead. What can I say? I was already dead, then I was bitten, and apparently I'm forced to die once more. But, before we begin a droll, depressing tale of my suffering at the claws of these Infected, let us start at the relative beginning of my sad, yet somewhat interesting. I do not remember much of my life as a Snorunt, for a week after I hatched, my trainer, whose name escapes me, forced my evolution with a Dawn Stone. But I harbored to no ill will, eventually coming to enjoy my beautiful, graceful form, though it did come at a sad price. I was not alive. Being the shade I am, there is no heartbeat, and I need not breathe. I'm hollow inside, and cold, and dead...

To prevent unnecessary sadness, we shall move on. When I came of age, when my teenage years hit me like a prize fighter, I was forced into a world of violence. Taught not to surrender, and to fight until the strain made me crumble. For a time I was strong, conquering my opponents with sheer will alone. My trainer thought it useful to teach me certain moves he got from odd little discs which he would use on me. After this, there is little I can remember, whether from the virus damaging my frontal lobe or whether from me having dementia, I do not know. What I remember next is my 22nd year.

I was fighting against some people known as the Elite Four or something of that nature, when I was defeated. My trainer always had a foul temper, but took care not to take it out on his Team. Today was different, and he released me, merely for making him lose. It was not my fault. He had sent me out to fight an Onix, and the Rock Type would not go down, and one Stone Edge later, and I was defeated.

Little was I aware, as I hopelessly and aimlessly wandered about, that my world, which I had become so fond, was beginning down the road to death, and decay. For a time after the Infection started I remained hidden, watching as the living came to die, and rose again, to feed on others. It was those Murkrow, who flew about in a great cawing cloud of blood and death. I was attacked, and injured in the fight. After cleaning and binding my wounds to the best of my ability, I set my path onwards to the south. Upon passing through to Olivine, I found the torn and defeated body of Regice, my personal Lord and God. To honor his passing, I took from him an offering of his body, Nevermeltice, which I will preserve as a token of the valiant golem's death.

Appearance-   Tenra is an average Frosslass, slightly small for her size. She carries a shard of Nevermeltice, almost always clenched tight in one of her hands.

Personality-   Tenra is quiet and rather reserved, though is passionate about those near her. She views herself as a sort of emissary, a wandering priestess, and believes that with enough devoutness and steadfastness, her lord may rise again. Tenra possesses a certain grace, borne of being undead for most of her existence. Though not the first one to jump into a battle or a rash decision, she will always stand by her choices until the end.

User Notes- - Is still contagious, and is not showing may signs of infection due to her typing.
- Due to the recent Infection time, and her high resistance and a slowly fading mental state, she does not know she is infected yet.
-History Written by The Big Cheese

Just a note, this character is for me after I return from Air Force Basic training
Apos

Ready for Approval. (bout time I did it)
Suicune

In the usernotes, it states that she isn't aware of her infected status, but in the history it does, so the conflict will have to be resolved there. Other than that, it looks great.