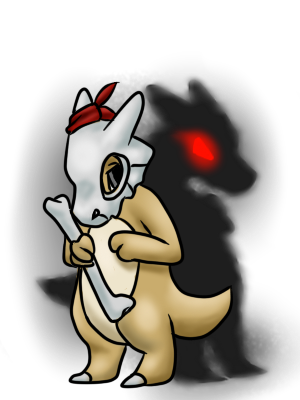 Eden was born right before the epidemic, a few days before his parents were taken away and killed. His memories often go into thoughts of that day since then, but his adventure did not simple end with 'his parents died'. Eden was soon adopted by traveling Floatzel, who took the young crying Cubone with them. Over the years, he was treated with care and love, though he was not the same species. The Floatzel parents did not have a son or daughter, so Eden was their only 'child'. He was with them 6 years, traveling around Sinnoh on his adopted mothers back.

One day, the small family was traveling through an ocean side, infected pokemon came out of no where, infected water pokemon killed the mother quickly, throwing Eden off her back. They dragged her into the ocean, Eden's father floatzel dashed Eden, but the infected were too quick and killed him off by slashing his heart. Eden watched his family die again. Eden fell asleep on the sand, it became night. The infected had gone away. When Eden woke, a spirit which he later called 'it' or 'the voice' was his shadow. A shadow in which he created himself, something he imagined, yet it struck to him as a ghost. 'It' began to talk him into things, it talked him into anything bad. He, being young and unaware, followed these commands from 'it'. He began to kill helpful bird pokemon and forest critters as 'it' told him to travel. Yet, he wasn't aware of this. His real mind had sunken away that day when his Floatzel parents were killed.

But soon his mind had come back from the depths. As he slept, his body shivered and he shot awake. It had been a year, his hands covered in blood. 'It' had not awoken from slumber, and he ran out of the cave he had mindlessly traveled into the day before and continued running. He washed the blood off his hands in a lake nearby. He then began to walk. Not knowing when 'it' would come back, or even if 'it' would come back at all.
Appearance A normal cubone, only has a red bandana tied to his horn on the skull.
Personality

- Eden's mind often goes back to memories of death when he was a child, he hates it and cries when it happens.
- Being young, he acts like a typical 7 year old, but due to terrible events he sometimes acts younger when scared.
- He has a temper, yet must of the time he is kind but shy.
- When 'It' comes, he screams and tries to get it away from him.
User Notes - He's shy
- Doesn't enjoy companionship at first, but warms up to others quickly.
- Always questions things and scared of them at first.
- The shadow('it') tells him what to do, and he obeys.