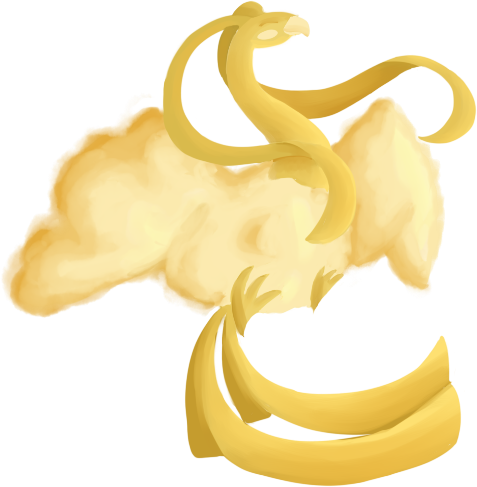 History:
For Diwali, pleasing her master was something that would be the greatest achievement of her life. The shiny Swablu was born when her master was breeding bird Pokemon repeatingly in hopes of finding a Pokemon that would have good stats for illegal cock-pit fights he held and partook. Diwali had no name when she was born, she had no name until her later years as a cock-pit fighter.
The Swablu didn't have good stats, it was just a bit higher than average, but that didn't stop her master from using her in the arena, for he knew that shiny Pokemon was rare, more rarer to have one fight to the death rather than pampered like a spoiled princess.

During Di's first arena as a Swablu, she was forced to be attack the opponent out of self-defense. She felt guilty for hurting others, but it was to please her master. She wanted to please her master because he would show an act of kindness by letting her outside. Around this time, Di's age was equivalent to eight human years.
For years she had continue this routine, Monday, Wednesday, and Fridays were days she had to be put in the arena, Tuesdays and Thursdays being her training. The weekend spent in either the cage or the fresh air. Di had won several battles, however lost as well. Consequences were given to her from her master when she angered him, most of them being kicking and practically keeping her from freedom. She was constantly abused, both, for the situations in arena, and out of the arena.

After four years of illegal fights, the shiny Swablu evolved into an Altaria, and became known as 'Diwali' [Meaning Festival of Lights] for when she does Dragon Dance, several dancing lights would fly in a spiral motion around Di.

Around this time did the Epidemic come closer, this was the time when she also became deaf.
Before the Epidemic broke out, Diwali was put in a tight spot, for she was in the finals of a tournament. Her master trained her hard, a bit of abusing here and there as Di sometimes messed up, but when the tournament day arrived, she messed up more than she had thought.
The battle started off; Skarmory against the shiny Altaria, mostly using stat moves to raise their stats to the highest it can go. When the battle actually began, the Skarmory charged at Di with a Steel Wing ready, where the Altaria dodged by barely an inch. She gave a Dragonbreath at the steel-type, only to end up just scarring the beak of the bird.
Hours, after hours, the battle ended when Diwali hit the ground when the Skamory lashed out a Brave Bird at her. To the Altaria, this was when all hell shall break loose for her.

The master and the opponent's master shook hands, being good sports.
That was just an act.

The moment Diwali and her master were alone, her master began raging and ranting on how useless the Altaria was, mocking her, and pointing out all the flaws that happened during the battle. The rant ended when her master sent out five Magnemite, commanding them to use Metal Sound at Diwali as loud as possible.
This was considered torture for Diwali, as the Altaria was sensitive to such loud noise.
The attack had permanently damaged her sensitivity to sound, causing her to be deaf. Not entirely deaf however, she can still hear, but barely anything.

The Epidemic hits one week after that incident, her master ran away cowardly, leaving Di alone in the house for several weeks.
That was, until, a group of surviving Pokemon found her. Hope filled in Diwali when she learned that they weren't as hostile as they looked.
Her hopes were once again shot down when all the survivors died, some sacrificing for others, some stopped believing in the future.
Diwali was once again alone, wandering the Unova region and trying to stay out of the undead's way.

Notes:
☆ Diwali is almost deaf. Despite the inability, she tries her best to read lips/mouths and if the character had no lips, she would try to figure out through movement of what they have said.

☆ Despite the fact that she's used to be a cock-pit fighter, her strength isn't that strong anymore due to the several degrades she had earned from her master that day she lost.

☆ She has a love for socializing, always wanting to meet new people, but because of her history of fights with others upon meeting, she can be somewhat rude and tries her best not to offend people when she talks.