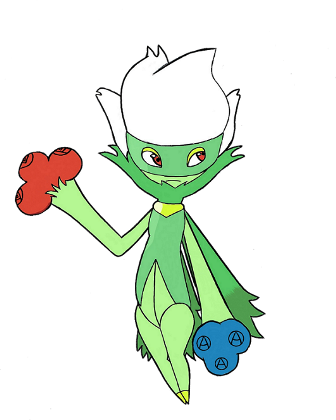 
History: Leah was raised by a terrible trainer. The trainer neglected her, trained her to the point of exhaustion, and didn't feed her. All of this while she was just a Budew. When the trainer suddenly died, Leah was all alone in the big city of Saffron. She wandered the streets in dark alleys. On a dark rainy night, a boy named David found the cold and scared Budew and took her in.

David treated Leah with more respect. He respect her limits, and they formed a close bond, allowing Leah to evolve into a Roselia. Leah's personality changed with evolution, however. She felt like David was weighing her down. So in the middle of the night, she took a Shiny Stone David had, evolved herself, and ran away.

He searched for Leah. Leah was doing just fine on her own. She trained herself, and made herself stronger by teaching herself how to use TMs, teaching herself three moves. She would always be fighting others for survival.

Leah ran into David in the same alley he found her as a Budew. She kept fighting his offers of returning, to the point of even going as far as attacking him. She turned her back to him, and he left in tears. Her opinion changed when she found him getting mugged. Saving his life, she chose to stay with him as a protector.

She kept this up for a while, even into the infection.

As the infection spread, she would protect David from infected. But one day, she failed him. She couldn't stop an infected Fearow from attacking David and killing him. She cried beside his body, mourning the loss of her only friend.

She roams the streets of Saffron now, living the life she's always lived. Fighting for survival. For David. She left Saffron City, hoping to find some other survivors, eventually arriving in Fuchsia City.

Personality: On the outside, Leah proves herself to be a tough as nails grass type. But on the inside, she is a softie who blames herself for letting David die. She only opens up to people she trusts. Other than that, she is mostly quiet and just simply observing.

I would like to move this back to the main profile computer for reactivation, please.
Mewtwo