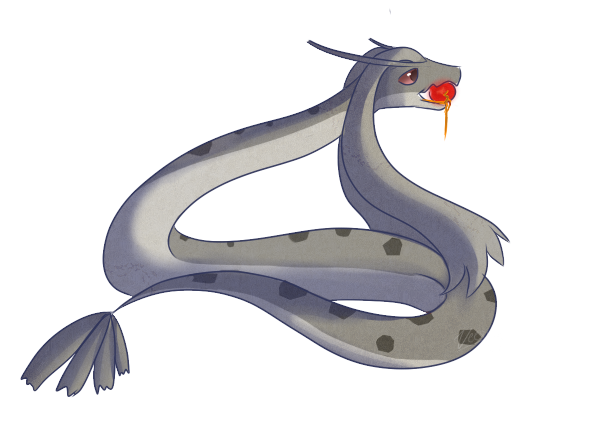 Height- 20'04" / 6.2m
Weight- 357.1lbs / 162.0kg
Pokédex Entry- It's said that a glimpse of a Milotic and its beauty will calm any hostile emotions you're feeling. / Its lovely scales are described as rainbow colored. They change color depending on the viewing angle.

Zeqme was always a rather gloomy and depressing Pokemon. He was always gray, ever since he was born. His family lived in the more darker and weaker corners of the town, which forced him to steal from others and kill to get his family sustenance. He knew that as a little Feebas he wouldn't be very strong and he wouldn't be able to steal things as easily as he would with a long, lithe body of a Milotic. Thus- he began to constantly groom himself- hoping he would become a Milotic.

And quickly enough his wish came true. His gray appearance carried onto his evolution, giving him the title of the most ugliest Milotic in the world. His scales didn't shine, they didn't change colour at different angles, they were just dull and dirty. He continued his thieving career, determined to make his parents happy.

One Summer the tide had went down significantly, and so all the water types had come out onto the beaches to bask in the sun. It wasn't long before they were all ambushed by purple-tainted Pokemon with glowing red eyes and blood dripping from their mouths. The majority were fire types, and although they all had an advantage they were too outnumbered. Zeqme watched as everyone were burnt to ashes, and snatched a broken and leaking Flame Orb that one of the infected dropped as a permanent reminder of the event.

Soon he began to cross seas, the Flame Orb constantly in his mouth as he swam.