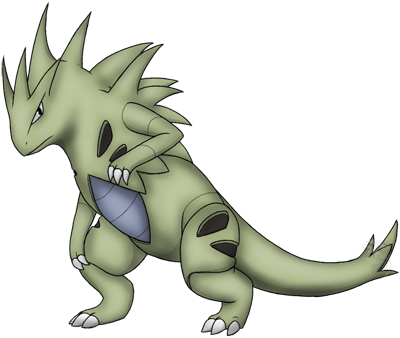 Ability-
Sand Stream
Nature-Serious
Characteristics-Proud of its power
National Dex No./Species- #248 Tyranitar/Armor Pokemon
Height-6'7"
Weight-445 lbs.
Pokédex Entry- Extremely strong, it can change the landscape. It has an insolent nature that makes it not care about others.

History
Locutus was captured, like many other pokemon, by Rockets, seeking to create some of the worlds strongest Pokemon and making them into walking death machines. From a young age, all he knew was cages, hatred, pain and a terrifying emptiness that grew inside him as he aged. As he evolved, he grew stronger, but still the scientists were not satisfied. They still prodded him, abused him, tested unthinkable things on him...and from all of this, there arose a violent side to him, one that made him black out and destroy all that was in his way...and this is what the scientists wanted. But they underestimated the kind of strength a fully grown Tyranitar possessed- they pushed him far enough and set him free in a room large enough for him to move...and that was all it took. Despite the reinforced walls, the hundreds of security measures, nothing could stop him. He tore through their base, tearing everything he could to pieces.
After he had 'woken up' from this, he was far from the base, and deep in the mountains. It was here he had his first taste of true freedom...but he was not happy. He was far too scarred to even understand the concept, let alone reach it.

User Note
- He is usually quiet and anti-social.
- He's laid back for the most part, mostly because he doesn't give a rats' ass about anything. The guy is a MOUNTAIN.
- Because of the things that happened to him, he is passive and has become numb to most things, including the epidemic. He is not a bit surprised by what he sees, though he was able to live without the epidemic for almost a year.
- His name comes from Star Trek TNG, but he isn't really based on Locutus, but more of the borg 'psyche' in a very loose sense. He was also indoctrinated as Jean Luc and Riker were, but for pretty much all of his life. He feels a whole lot of nothing most of the time, but when something does manage to piss him off, decimation always follows from the overload of rage and pain.
- The things that trigger his black side are things that make him remember the things they did to him.
- he struggles with a parallel of either not feeling anything at all or too much at once. This is a result of the indoctrination. The experiments and chemicals they induced into his brain damaged certain parts of it, in their attempts to 'shut off' their emotional and moral understanding.
- he's very strong willed. Not many others survived the atrocities that happened in the lab. He was one of the few. He knew a few of the others, and he tried his best to keep them mentally strong, but they all eventually broke or died. He doesn't remember alot of the others, but it does come to him in flashes.
--In his rampage, he killed alot of the pokemon captive there. They were begging for death, and he killed them. that was when he snapped officially, and not from the experiments. He was also begging for death, but he doesn't remember any of that. When he went on a rampage, he wanted them to kill him, but he was too strong for them.
- He doesn't like violence. He detests the thought of killing another or even hurting them, but he can't control himself. The indoctrination still has a large hold of him. There are times where he understands the value of life on a deep level, and other times, it's completely trivial to him. It's a reflection of his mental instability.
- He continues to fight the indoctrination, but he knows that it comes at a cost of potentially losing himself again and killing everyone around him in a fit of rage.
-He speaks on a very basic level due to brain damage. He understands complex ideas, but some very basic ones are lost on him.
- He speaks formally, and doesn't understand slang or basic things that are common in normal life, on account of him growing up in a cage.