Waylon growled as he dragged the berries behind him. He was happy to finally be back from looking around and managed to gather some fat Sitrus berries. Waylon managed a Rawst berry as well for the burn on the purple snake's tail but everyone must be hungry. He wiggled his way back into the house with the plastic bag still held tightly in his jaws and sat triumphantly beside the Sandslash. I'm back! And I gathered some berries for us to eat! No need for growling bellies anymore. Waylon chomped on the bottom corner of the bag and tugged on it getting it to spill the berries into the floor near his front paws. They're mostly Si... What was it... Sitrush berries! They're almost ripe so they may not taste as good but they'll still take up the empty space in your belly. He held the Rawst berry carefully in his front paws and grinned. This one's for burns though so it kinda has a real... Foggy taste and smell like those smelly leaves on a Gloom's head... Waylon brought the berry to the pretty pink Dragonair and dropped it in front of the purple snake. I sorry I burned your tail mister but this will make it all better!

[You must be registered and logged in to see this image.]
Lilycove City || Noon [29] [32]
Royce hadn’t the patience or energy to decipher Jack’s accent, only succeeding in getting the idea that he wasn’t particularly fond of this regal newcomer and leaving it at that. The serpent didn’t particularly care for his reasons. He allowed his eyes to droop, taking a deep inhale as that country burr droned on until a sudden chill tingeing the air forced him back to his senses. Rose had given a quiet scream at the sudden attack, moving close to her mate who had risen to his full stature with the threat of violence lurking on the horizon. But fortunately, the Ice Beam had been destined for Jack. Seeing this, the serpent’s frown softened in an unkind smirk, hoping that the ‘Emperor’ was a good shot.

"I am Emperor by blood and my lands still remain wretch. Though the population has greatly suffered I am still their ruler and I told you, you will show me proper respect."

Well, delusional or otherwise, Nero was proving quite the comedian. Royce’s haggard features were rejuvenated with an amused grin, the serpent leaning lightly on his mate as he watched the scene unfold. Raven leapt into action, snapping at the fox and preventing another attack with a slash of her claws. Rose flinched away at the violence, silently willing for a miracle to dispel the overwhelming tension, and instead left relishing in her mate’s calmness. It was rare for him to be so chilled and she was making the most of his affections, regardless of the scolding that would no doubt await her behind closed doors. He wouldn’t risk hurting again whilst Jack and Raven were around.

"Seriously dude, get the fuck out."

“Oh please, carry on,” Royce chuckled, finding a twisted amusement in the rising tempers whilst he was totally at ease. Whilst he had already established a disliking for the pair of vermin who had attacked him earlier, Nero wasn’t completely lost of him. It seemed the Glaceon had a couple of screws missing, but he spoke well, fluently, and showed the determination to put the rats in their proper place.
“Waylon!” Rose interrupted with an excited cry, catching sight of the young pup trudging back onto the scene, completely oblivious to the situation he’d stumbled upon. With him, he dragged an amount of berries before plopping himself and his findings down by her coils. The Dragonair lowered her head to gently nuzzle the talkative pup, glad to see the canine in one piece.

“ I sorry I burned your tail mister but this will make it all better!”

Royce looked down to the canine with a raised brow, surprised that the whelp hadn’t been knocked out by his attack – stubborn brat. But his apology was half-admirable, the giant serpent’s glare lingering on the pup until turning away with a sigh. Rose’s amber eyes hadn’t left her mate, terrified that his temper may flare and see an end to little Waylon, but fortunately, he was more interested in the ice-fox’s aggression. She heaved a sigh of relief, face lighting with a smile as she turned to the Houndour.
“He says ‘thank you’,” The dragon-type whispered, accepting the berry on the Arbok’s behalf. She would deal with her own wounds later, now she knew her duty laid with elevating Royce back to his prime. Smearing the berry onto the burn, Rose proceeded to gently rub the juice into the injury with the tip of her own, bloodied tail, content in distracting herself from the drama around her.
Baloo

Waylon giggled when the pretty Dragonair nuzzled him and grumbled at the amount of bickering. He never cared to argue about much unless it was playful stuff with his momma. Mostly about baths and eating begetables. Waylon stuck his tongue out and grimaced. He hated begetables. They tasted like Bigoroth armpit. Waylon had seen those outside too. And the things with the claws! There was Bigoroths outside! And and... Those things with the claws! He held up his paw which lacked claws and swiped at the air successfully throwing himself onto his back. Ya know? Those things that fight snakes a lot! Waylon looked at the purple snake and gaped. They might wanna get you if you go out there mister! He rolled over and stared at him. But you will beat them up if they try right? Cause your powerful! Waylon grinned attempting to look sinister and tried to clench his paw like one would clench their fist however it did not work...

((Permission from Admins to make leaving posts while in SH)) 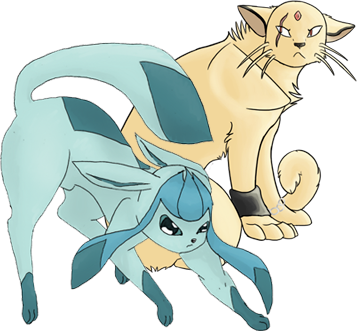 Lilycove City|Noon
(R-48/N-8)
Nero couldn't take the smart mouthed bitch anymore. Lunging angrily he tried to take her down but the female was quicker than he thought. She dodged him easily and soon he found her paw pinning him to the ground, her full weight pressing down on the back of his neck. "Get...off...me!" he weezed. Raven just laughed. "Some royal asshole keeps starting shit with me so I'm a little on edge. Maybe if he behaves I can let you up." Fucking whore. "Don't...speak...to me...like I'm...not...here." More laughter.

Angrily he spiked his fur as sharp as it would go causing the Persian to yelp in pain and surprise as several of the barbs pierced the tender pad of her paws. "Dick!" Raven was beyond pissed now. Even as Nero summoned a hail, inside the fucking house, she still went after him. A Slash glowing upon her claws she raked them towards the Glaceon causing him to jump back in alarm. "Leave me alone!" he cried, voice going high and cracking slightly. His eyes went wide and for a moment Raven thought he completely broke with reality when he suddenly started screaming for 'them' to leave him alone. Who the hell was he talking about?

The prick ran outside but Raven wasn't having any of that. She would chase that fucker to the edge of the damn world so long as she got to take a chunk out of his hide. He crossed the line too many times with her. For a brief moment she thought of Rose and Jack, hoping they would be okay with Royce up an about, but as Nero threw another volley of ice at her anger once again consumed the feline and she pressed harder to catch the idiot Emperor.

((Leaving post. Sorry it is so lame but I have a lot going on right now and need to pull some teams. I love Raven so hopefully I can bring her back soon but Nero was dragging me down. Love you guys!))
Silverishness

Finally, as the little indignant prick of a glaceon said something a little too far, Miss Raven pounced on him, using her larger, more muscular frame to pin the little mule to the ground. "Woo!" he cheered, the scene reminding him of some Colosseum matches he'd watched. "Beat 'im to the ground!" In true Orre fashion, she toyed with him a bit before truly attempting to hurt him, but a cheap shot got her off of him.

But then... something happened. Something really, really weird. He just started screaming for "them" to leave him alone, and Jack was fairly sure that from that distant, wide-eyed look that Mr. Emporer might not have been talking about anyone actually present. But as he raced out of the house, so did Miss Raven. Surprised, Jack went on instinct to follow, calling after the persian. The hell was she running after him for?!

[You must be registered and logged in to see this link.]

[You must be registered and logged in to see this link.]

[You must be registered and logged in to see this link.]
Commissions Open~!

Badges Earned:
[You must be registered and logged in to see this image.]