KB and Unmei, the Treecko and Cascoon [inactive]

KB and Unmei, the Treecko and Cascoon [inactive] 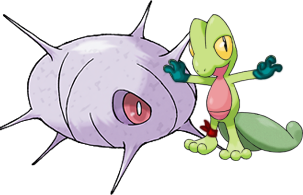 Abilities
Overgrow: When HP is below 1/3rd, Grass’s power increases to 1.5 times.
Shed Skin: Every turn, it has a 1 in 3 chance of healing from a status condition (BURN, PARALYZE, SLEEP, POISON, FREEZE).
Natures
Brave: will dive head-first into a fight, is not afraid to speak her mind (KB)
Careful: she is very concerned with everything around her, and is more than willing to take the easy route (Unmei)
Characteristics
Somewhat stubborn: she will stick by her values to the end, unless blackmailed/persuaded otherwise (KB)
Very finicky: she expects the best of the best, and will take no less (Unmei)
National Dex No./Species
#252 Treecko / The Wood Gecko Pokemon
#266, Cascoon / The Cocoon Pokemon

Height
1’05” (KB; slightly shorter than average Treecko)
2’04” (Unmei)
Weight
11.0lbs (KB)
25.4 lbs (Unmei)
Pokedex Entry
Treecko: The soles of its feet are covered by countless tiny spikes, enabling it to walk on walls and ceilings. (BW Pokedex)
Cascoon: It never forgets any attack it endured while in the cocoon. After evolution, it seeks payback. (BW Pokedex)

Item
KB: A scarf and gloves that she received from her owner.
Unmei: None

History
Born into a loving family in the wild, Kay Blitz couldn’t sit still. She would fidget as her father spoke lectures to her, would finish the tasks her mother gave her quickly, and would be out in the forest as soon as she could. It was in those woodlands that Kay realized what her talent was; story-telling. The other wild Pokemon would gather in friendliness around her as she tied together an intricate story right on the spot, speaking of faraway lands and great escapades.

Her fame in the forest was short-lived however, as she was caught one day by a passing trainer. The gentle woman who caught her was a collector, and tended to Kay as if she were a queen, training her at the Treecko’s pleasure. She was taught to read (something she rather enjoyed), and took morning strolls in the forest (though she was never allowed to run off on her own). Her trainer taught her the TMs and tutor moves that she knows to this day, and KB's life was, in short, luxurious. However, KB didn’t like the soft life. She longed for traveling and adventure, not being pampered to the point that her only chore was to sit obediently.

She ran away one night, nearly a year after being caught, though Kay made sure that her trainer would be alright on her own- while she didn’t like being tended on every whim and want, she certainly didn’t dislike her owner, whom loved her as much as her own children. KB ran into the night, and back to the forest to greet her parents and her friends in the woods. She never met them however.

She ran through her home, through her forest desperately, unsure of what to do. In the madness of her escape, she met a feisty Wurmple that, though they teamed up due to the life-or-death situation, did not take to KB at first. They constantly fought over who was the 'leader' and who would eat first.

But maybe it was because KB didn't know about Unmei's past; Unmei was a product of a bet between two best friends, to see whom could get a shiny Pokemon from hatching eggs first. One was a boastful man, and he told himself that he would win this near impossible bet. The other contestant, a kind and gentle woman, only agreed to do so because she was his best (and only) best friend.

So came the multiple eggs that hatched, only to turn out as normal colored Wurmples or Weedles. Unmei was one of the many regulars, but for a strange reason, the breeder (the caring woman) took to her and brought her home one day from the daycare. From that day forth, Unmei was the lady's personal Pokemon, a friend and roommate. Though the woman had to take two jobs and worked endlessly to make ends meet, she loved Unmei, and the Wurmple silently loved her back.

When the pandemic hit, killing the populace around Unmei and her trainer, they were beyond frightened. They were in a state of shock. "Granddad... Grandmom... They're..." Verity's hollow voice rang in the Wurmple's ears, and it hurt her just to hear it. What can I do? Can I help her? With each passing day, Unmei felt hopeless- her trainer did everything for her, and here she was, doing nothing in return. In the Pokemon's anguish, she ran away from their haven.

She met up with KB, and though she won't admit it, she's relieved that the Treecko can distract her from the knowledge that she was useless to help others.

User Notes
--- KB has a knack to seeing the smallest details
- Independent; will try to do things on her own
- Can get emotional sometimes about tender topics
- Is a lesbian whoo hoo; likes to dabble onto other females~
--- Unmei is scared to evolve, just in case she becomes a Dustox, which she thinks are "hideous"
- When she becomes attached to her friends, she does everything in her will to help them
- She is very fickle and thinks herself above others
- She only eats leaves with morning dew on them

Please put the gloves and scarf as items-- lol, they count.

The two are ready to be approved!
Negative10

They've been ready to approveeeee
Lugia