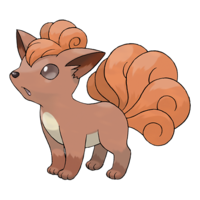 Ability-Flash fire
Nature-quiet
Characteristics-highly persistent
National Dex No./Species-#037 Vulpix/ Fire pokemon
Height-2'0
Weight-20.8lbs.
Pokédex Entry-Sapphire
Inside Vulpix's body burns a flame that never goes out. During the daytime, when the temperatures rise, this Pokémon releases flames from its mouth to prevent its body from growing too hot.
Item-power belt
History-this pokemon has gone through many hardships with being lonely on the streets with just enough to get by, by visiting different shops in an assortment of towns in the region.
Then, one day a child was visiting Azalea town saw a lonely looking vulpix and fed her. while looking around the town he noticed the vulpix was following him so he decided to make her his companion. One day the child was out in the forest exploring and sight seeing(with his companion for protection) when suddenly a Houndoom jumped out of nowhere and attacked the boy. as the boy looked up to see what tackled him he noticed this Houndoom seemed different....it had scars all over its body and its fur seemed stained with blood. And out of nowhere started gnawing at the child he was scared and his companion was confused and didn't know what to do. she tried to ram the Houndoom but it was too powerful. She looked for help but nothing could be found so she ran away scared and in tears, but that day she promised she would do anything to make herself stronger...
User Note- named after a character from the anime/manga Soul Eater

She will be approved once you read the rules.
Also, alter your history, so the vulpix' trainer is omitted, as there are no humans allowed yet in the story.
Suicune

Thank you, she is approved.
She'll be placed on the Alph team, and your turn will be after the Flareon.